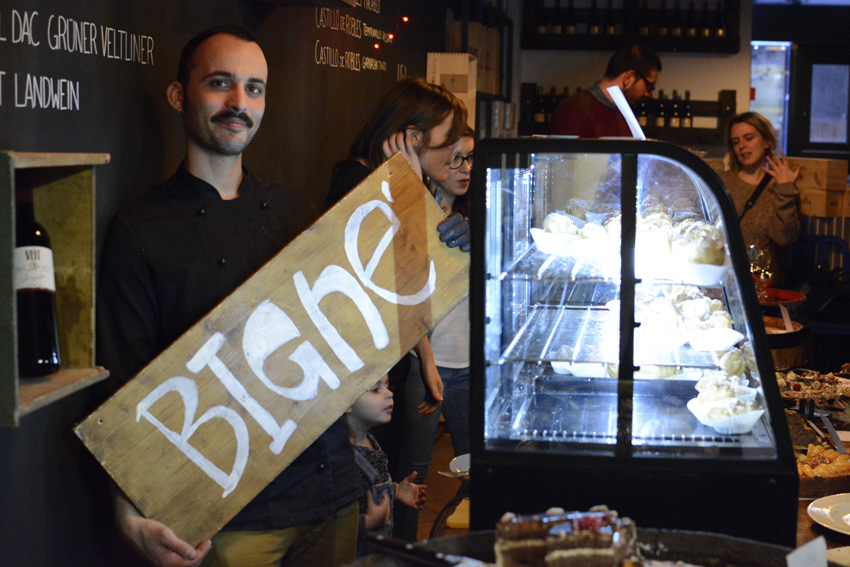 Would you like to taste excellent Italian beignets? You just have to go to Kuchen von Gaia and try the different flavours among cream, chocolate, ginger&orange… Giulio Silveri – 29 years old, from Acilia – was already popular among Friedrichshain inhabitants, who have been going every Saturday morning to Boxhagener Platz street market to enjoy the tastes of his delicacies. From October 2018 he has a special own place in the Markthalle IX in Kreuzberg.

Kuchen von Gaia is the name of Giulio’s business and also the name of his daughter. «Gaia is the reason why I live in Berlin. When I lived in Rome, I worked and had a fixed salary, but I didn’t want to let her grow up in Italy. Here she is happy, she can speak German better than me and the German State helps us with the Kindergeld.»

Giulio used to work as an assistant in a Sicilian handcrafted ice-cream parlour based in Acilia. When he started working, he did not know so much about ice-creams and their production but, one year later, he was able to produce excellent ice-creams to the point that his supervisors used to let him manage the parlour indipendently. «One of my habits is that if I start managing a job, I immediatly resign» Giulio says us with a smile. «I usually do it in order to find new incentive motivations.» This is why, on November 2013, Giulio moved from Italy. «I was torn between London and Berlin, but the British capital is too chaotic and I wanted a city suitable for Gaia, so I decided to come here. I worked in a pub for the first three months, then I started working for Barletta Ice, a company that produces about 3000 kilograms of ice-cream per day and exports them to Germany and Poland. It was completely different from the Sicilian ice-cream parlour where I used to work; in Barletta Ice I had to work with very expert people and I had to use bigger kettles – they contained about 6000 liters! At the beginning I had different tasks, then I started working at the pasteurisation of the milk and I learned a lot. On January 2015 I decided to made a qualitative leap.»

«So I started working at the Wochenmarket in Boxhagener Platz, where I still work on Saturday. (On Sunday I work at “Neue Heimat”, in Revaler Straße). Here I serve different kinds of products, not only desserts. During the winter I sell many pureed soaps, lasagne and bruschette. In the warmer days I also serve slushies, but the beignets have always been the centerpiece of my production. At the beginnings I didn’t have many clients, but then I realized that people came back despite of the cold winter temperature. On April there was the boom: every Saturday new people arrived asking me: “Are you the boy that sells beignets?”. I have a composite clientele: there are German people, that ask me to divide a beignet in two parts – even if my bignets are quite big – and there are Italian clients, that thank me for letting them taste again the Italian flavours.»

«Participating in the Amateur Cake Championship organized by Berlino Magazine was an amazing experience. I did not expect so many people in the public and so many congratulations. The championship was held in The Wineryrestaurant, where the atmosphere was very relaxing and there was a good interaction among German and Italian people. Another positive aspect was that many people ask me for a seconds. It is very difficult to combine work and family, but satisfactions like winning the Championship pay me back for all my efforts and encourage me to give the best of my self here in Berlin.»