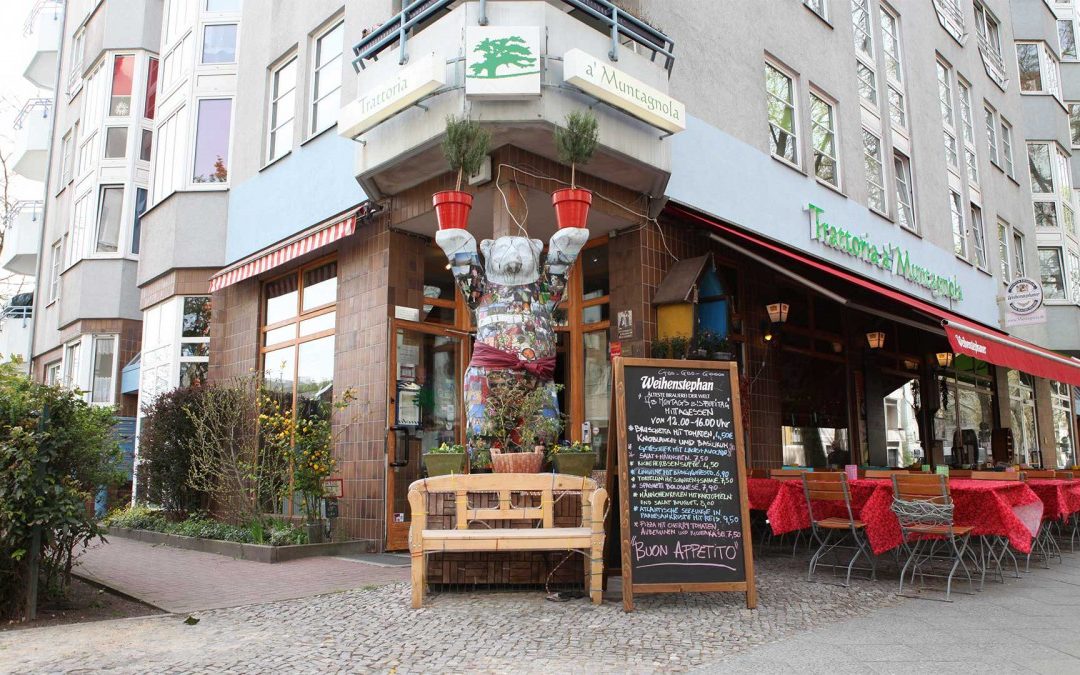 This is one of the historic Italian restaurants in Berlin, offering a menu for all tastes with best quality products.

“Specialties from Basilicata, my mother as a chef and a suitcase full of stories: that’s my Muntagnola.”

Read the article in German or Italian.

“Before opening my restaurant, I used to work as a waiter in Berlin and I used to manage a restaurant in Basilicata that I inherited from my father. When I opened my restaurant here in Berlin, I had a clear idea: bringing Basilicata culinary tradition in Berlin. Then I asked my mother, already widow at the time, if she would have helped me managing the restaurant in Berlin. She was 55 at the time, she didn’t know any words in German and she was supposed to stay in Berlin for just two months. Today she is still here managing the kitchen restaurant with her recipes. “

Ravioli seasoned with cinnamon and ricotta, Strozzapreti (an elongated form of Cavatelli, or hand-rolled pasta typical of the Emilia-Romagna, Tuscany, Marche and Umbria regions of Italy) with butter and sage, gnocchi with ricotta, fusilli with mollica (soft inside of bread), tomato and sultana grapes, agnello alla Contadina (cooked lamb seasoned with oil, potatoes and onions), castrato alla pastorale (adult lamb stew seasoned with onions, garlic, peppers and celery), fillet of beef, beer braised rabbit, bruschetta seasoned with fish eggs, fresh mussels, homemade bread, buffalo mozzarella, grilled Scampi and much more; the menu is so wide and varied that Pino and his mother have already published two cookbooks in Germany in order to never lose these recipes.

Every week you could find new specials in Muntagnola menu. “Sometimes it happens that a foreign guest leaves someorecchiette in the plate and then I usually try to make him understand the hard work behind that dish; so if he wants I invite him in the restaurant kitchen to show how my mother makes every single orecchietta with her hands.”

“In the morning my mother, the “Muntagnola”, usually goes food shopping; she is the boss in the restaurant kitchen even though in the last years I’ve hired another chef in order to help her. My mother’s real name is Angela; she was given the nickname by my father who considered her a “montanara” (a person who lives near mountains). According to Pino, his restaurant is a starting point for other cultural and social projects: “We organise reading events, we host film festivals and concerts; a short time ago we hosted some children affected by AIDS and we wrote a book in order to gather funds to help them.”

In 2007 Pino was one of the Mafia? Nein Danke co-founders; this anti-mafia association was born after the Duisburg murder but also after Mafia attempts of extorting money to Italian restaurants in Berlin. “On 9th November 1989 when the Berlin Wall fell, I used to work as a waiter in a restaurant; when we heard the news on the radio we went all near the wall. It was a day of celebration, we cried a lot. Today I can talk about my restaturant with pride. Berliners always reward people who work hard for themselves and for the community. I look to the future with optimism, aware that new surprises are yet to come.”

Open everyday from 5 pm to midnight