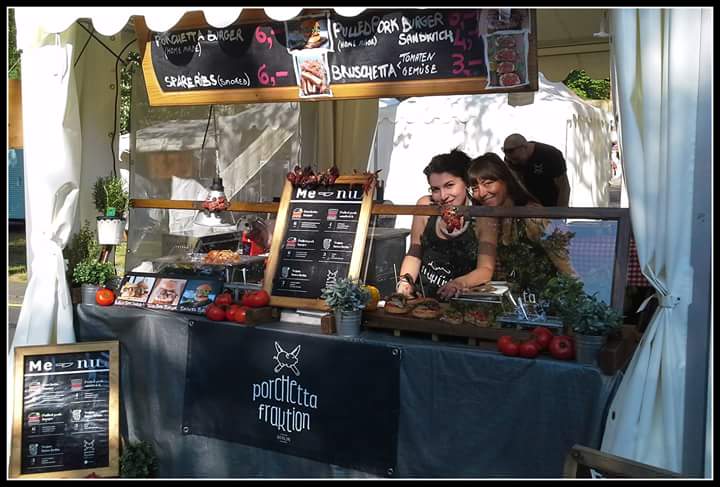 BBQ Fraktion, the real pulled pork and porchetta taste, from Rome to Berlin.

Since 2014, already three years ago, you can taste the  traditional Roman pulled pork even in Berlin, thanks to BBQ Fraktion. Four guys bonded together by a real passion for good food turn this project into reality. Two couples arrived in Berlin at different times with different passions decided to come together as a team to offer something new to the city: pulled pork, namely porchetta. Patrizio and Francesca, the first couple, Jula and Milena the second one. All four from Rome, all four are good food lovers. Patrizio is the only one trained as a chef. Before the creation of BBQ Fraktion each of them already has a street food buisness. Patrizio and Francesca start their own buisness here in Berlin selling panzerotti, pizza pockets, and supplì, instead Jula and Milena have a chestnut-vendor’s stand in Charlottenburg Christmas markets. Patrizio told us that before being buisness partners they are first of all great friends. «We first met at Charlottenburg markets – Patrizio states – from that moment a real friendship began, relationship that let us starting a buisness together».

«What we are selling is the real pulled pork from Rome, but with something more» Fabrizio begins. Their pulled pork is created by using high quality ingredients, used to exalt all its main features. Prime rib pigmeat of Brandeburg to start. «Tronchetto is the cut of meat used» Patrizio told us. In fact, BBQ Fraktion, according to a traditional recipe of Lazio, choose to use not the whole pig  but only this part. It’s a very tasty cut of meat, it’s a part of the pig chest. We debone it, flavor it with spices, roll it up, and cook it. At BBQ Fraktion there’s a particular care for the cooking, thanks to the use of the best ovens and barbecues. Even the wood used for the fire is the result of a well balanced chioce: they only use applewood or cherrywood that gives to the meat a unique taste. Patrizio underlines that « the cooking time has to be very slow in order to add some flavour to the meat without getting too much dry».  The attention and the care with whom every passage is done contribute to the uniqueness of this pulled pork. We’ve tried to discover the spices mix used to add flavor to the meat but they’ve preferred to keep the secret, only adding that«the mix used is the traditional one but with something more»

At BBQ Fraktion you can taste also a deliciuos smoked pork shoulder, not only pulled pork. During the pork shoulder preparation there’re the same attention and love used during the pulled pork one. Both the pulled pork and the pork shoulder are served as an hamburger or in a tortilla to form a taco. Both the bread and the tortilla are 100% Italian. The first one is baked by Sironi bakery which uses Italian primary products and recipes. The second one is not the traditional mexican tortilla but baked according to the italian taste, with wheat flour instead of corn flour. There’s also a taco vegetarian version filled with pico de gallo, a original mexican mix. This filling too is cooked according to the Italian flavour with onions, tomato, lemon, chili and parsley. BBQ Fraktion has a homemade sauce called cimiciurri, made up of oil, parsley, vinegar and lemon.« It may sound strange combine this sauce to the pulled pork – Patrizio admits – but this is an experience to try out. It’s the garning used to marinate the roasts and it’s perfect to bring out the meat taste». In addition to this  caramelized onions, marinated cabbage salad, avocado sauce for tacos and a special prune bbq sauce are prepared. During summer the choice is wider, delicious bruschette are prepared with roasted vegetables and tomatoes .

Where to find BBQ Fraktion

There are two stands: one is in Kulturbrauerei and one in Mauerpark. To underline the attention to details, every stand is handcrafted by the four guys. BBQ Fraktion stand is a regular guest at every street food festival and best events in Berlin: Karneval der Kultur and Maifest are a fixed step since the first year. This stand has also attended the Berlin grill fest, the biggest barbeque festival in Berlin. Follow their Facebook page to know all their movements.