The sweetest fight: Pandoro or Panettone? 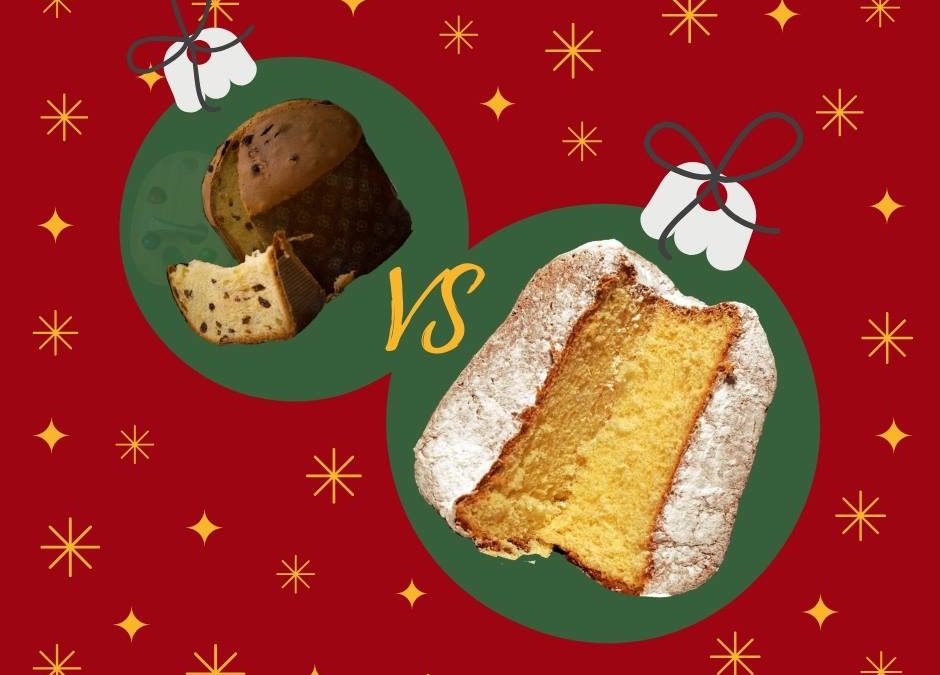 When it comes to the Christmas dinner, Italians know that it is the typical moment when family and friends get together, enjoy their meal, spend quality time with their loved ones and… well, friendly fights are on the agenda. In this softly combative atmosphere the sweetest fight takes place: pandoro vs panettone.

Pandoro is a yeast bread, whose name means “golden bread”, as on the inside it is supposed to be the same colour as gold. According to the legend, pandoro owe its name to a baker’s apprentice who saw the sunlight shining on the pandoro, painting it, well, gold. It is shaped as a pyramid eight-pointed star and it represents the modern version of an ancient Roman delicacy, called “nadalin”, which is tought to be shaped differently and to have a diverse texture. Nowadays, pandoro is known as a Venetian dessert since in XX century Domenico Melegatti, born and raised in Verona, delivered his own version of the recipe and made it famous. What makes pandoro such a good opponent to panettone is its versatility. As a matter of fact, pandoro can be enjoed as it is, with powdered sugar (our personal favourite) or stuffed (chocolate, vanilla or pistachio sauce, mascarpone cream or zabaione…) and even when Christmas time is gone there are always tasty recipes to try.

Panettone comes from Milan and it consists of a loaf of bread, very tasteful and light, filled with candied fruit and raisins. These last represent the bone of contention: either you love them or you hate them. This is why pandoro fans will leave aside these small nuggets, when they are offered a slice of panettone. The word panettone means “bread of Toni” and it reveals the origin behind the sweet. It is the story of a young cook named Toni, who was working at the service of Ludovico il Moro, Duke of Milan. A dinner for the Duke and his friends was commissioned and Toni prepared an amazing menu and everything went perfectly, until he realised that he had forgotten to prepare a dessert. The pantry was empty, as he had used everything for the dinner, so he had to bake something rapidly and with only what was left: water, flour, eggs, sugar, raisins and candied fruits. Everyone loved this culinary invention and that is how “Pan di Toni” was born. Luckily for us. The sweet is today the symbol of Milan, where it is also called “panetün”.

What is this this challenge about?

Pandoro and panettone have been facing each other since forever and this sweet fight comes from the different origins and histories of these two. Although they look alike (they both are types of bread) and they are interchangeable, everyone has their favourite and the solution to make everyone happy is to have them both ready, as otherwise there will be always someone saying “Nice dinner.. too bad for the pandoro though!”.
Long story short, pandoro and panettone are different when it comes to:
– shape: pandoro is a eight-pointed star, panettone is a cupola-shaped loaf of bread;
– crust: pandoro is evenly soft, the top of panettone is crusty, crunchy and covered with almonds;
– dough: pandoro is vanilla-flavoured and generally served with powdered sugar, panettone has those X-Factor candied fruit and raisins.
So…which one will be your poison?