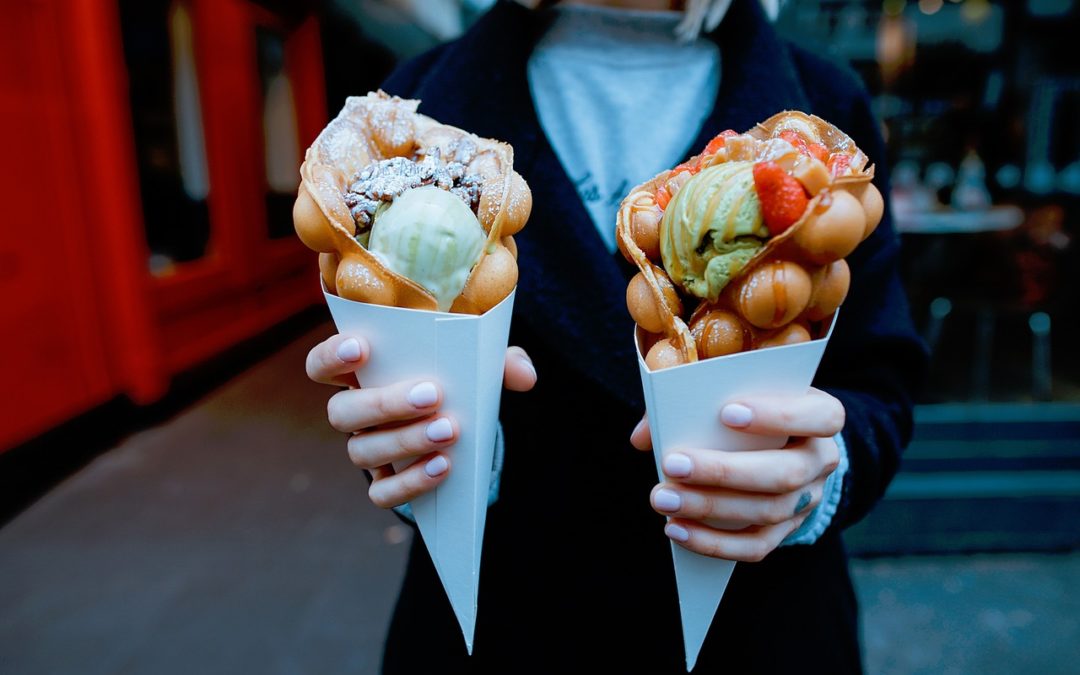 What is the real Italian Street Food tradition? “cuoppo”, “arrosticini” and so on. A triumph of taste.

Nowadays streets are full of food trucks, kiosks and stands where food is the real protagonist. In Italy, there are many symbols of street foods, from the North to the South: pizza, pane and panelle, bread with milza, lampredotto, cuoppo and so on. We have talked about the origins of pizza but there are so many dishes to discover. Let’s start listing them! Don’t forget to come at our Italian Street Food Festival 2019, you will have the opportunity to taste some of these delicacies.

It seems incredible but it’s been 1000 years since their invention. This street food was born in the marvellous Sicily and is a sort of polenta made by beans flour, water, parsley and then fried. In the past, the “panellaro” was peeping out at the corner’s street with his little cart which contained a stove, a pot full of hot oil, a container for salt and the already cooked panelle on display. Important was the strategic positions in front of the historical high schools of Palermo where, just before the beginning of the lessons, the boys did not disdain to replace the cornetto with a robust sandwich with panelle. This food was invented by poor people for feeding themselves and then became well known in all social classes. Arabs invented it between IX and XI century and through the years this particular food obtained success by the Royal House, writers such as Luigi Pirandello, Leonardo Sciascia and some politicians. Basic but tasty. In Napoli there is the traditional “cuoppo”: it offers so many fried specialities, savoury or sweet. This was a dish created in 1800 from poor people. It was usually cooked on the doorway using the few ingredients they had. The savoury version can be made with meat and fish groceries, such as cuttlefish, shrimps, anchovies, panzerotti, zeppole, little balls with rice or little pieces of polenta. In the alleyways the fried food was a sort of reference: they also accepted payment up to 8 days, in order to help people to have enough money to feed themselves. Its name is curious, and its history is ancient. The hanged caciocavallo is omnipresent in every self – respecting country fair. Abruzzi and French shepherds used this particular cooking method during the transhumance period, when they moved through grazing land following the journey signed by “tratturi” (a large trail formed because of the periodic displacement of the flocks). During the night they seated around the fire to warm up and to tell some stories. The time flowed eating very simple food: among them, there were cheese pieces which were made “sweat” on the flame and laid down on the bread. The hanged caciocavallo is one of the Abruzzi’s conviviality symbol, similar to barbecue for Americans. This food belongs also to the beautiful region of Abruzzo. This is another pastoral traditional delicacy. Normally arrosticini are eaten with many slices of bread, extra virgin olive oil, bruschette, cold cuts and homegrown cheese. The Montepulciano wine is unmissable, otherwise a mix with wine and soda is still in use in some authentic restaurants. This delicious street food is made with sheep meat, cutted into pieces alternate with pieces of fat and then put in a meat skewer. It has noble origins, derives from the French tradition and is the etymology of today’s gateau. The spleen sandwich was created by Jews who paradoxically did not eat it. In the halal and kosher slaughterhouses they were not paid because of the laws of the Koran and the Talmud. For this reason, in exchange for their work, they received the interiors, lung, spleen, cartilages of the throat. With a brilliant market investigation worthy of those of today, they questioned the quantity of Muslims and Christians. Being the Christians in a big competition they created a sandwich that wears eating lard. Thus the spleen sandwich was born in the walls of the slaughter of Palermo of the Jews and the Muslims. a classic sandwich loved by the famous poet Dante who wrote “The Divine Comedy”. It is made by one of the four stomachs of the calf and it is very delicious. It is very interesting to look at the fascinating food trucks turning around Florence. They are not the made in the original version, in a wood and multi-coloured version , but the gipsy charm is approximately the same. Lampredotto is cooked in a big pot with broth, which contained also tomatoes, carrots, parsley, onions and potatoes. There are many versions of the bread with lampredotto but the vast majority prefer lampredotto in its classic recipe: a crunchy sandwich whose inner sides are wet just with boiling broth, stuffed with soft and simple boiled meat, seasoned with salt and a generous sprinkling of black pepper. The ritual question for the Florentine tripe awaits you: do you want it wet? Answer yes. They will then dip the upper portion of the sandwich into the saucepan, which will be served tasty and dripping.

Let’s turn to Napoli for the last food of our little tour through some symbols of an Italian street food. Cannolis are a very ancient food and have uncertain origins. There are two versions of their origins. It appears that they were born in Caltanissetta, which takes its Italian name from the Arabic one “Kalt El Nissa”, in other words “Women’s castle”, that we all know as “harem”. Probably the emir’s favourites baked some pastries, and one of these was the cannolo. In the second version, the cannolo was invented by cloistered nuns for the Carnival. The legend about concubines and nuns can be true. In fact, at the end of Arabic domination, the harem turned empty and many women, became Christian, fled in a convent and perhaps taught nuns how to prepare cannoli. One thing is certain: its roots are date back in Arabic domination in Sicily, from 827 until 1091. From the past to the present, this lovely pastries continue to delight children and adults.