To Spritz or not to Spritz? 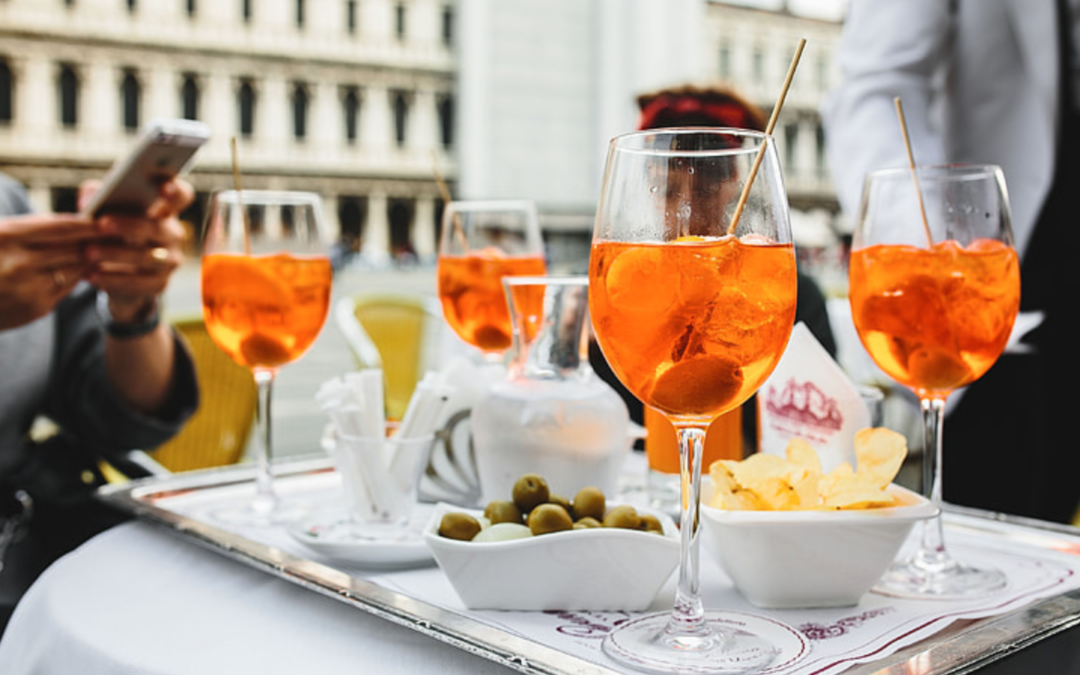 In its original recipe, the ‘Aperol’ is served matching Prosecco and seltz, and is accompanied by some ice cubes and a slice of orange. This is exactly how the famous ‘Spritz Aperol’ was born.

The secret to obtain an excellent Spritz is really simple: the choice of a good quality white wine.

Lately this drink’s been getting popular abroad just like the cocktail to be consumed as an aperitif before a meal, even better if accompanied by some appetizers. As an alternative to use the Aperol, we can vary the Spritz with other variants: Campari, Negroni or Select are just some of the most used.

The Spritz as we know it today was officially born around 1920 and 1930 in the area between Venice and Padua, in the Veneto region. Its origin is not so certain, but it seems to come right from the hearth of the Venetian lagoon. Around 1500 the historic Serenissima (today known as the city of Venice) was going through its golden years. A fundamental role was reserved to the naval industry and to the job of the workers in the Arsenal, the ancient complex of shipyards and workshops that constituted a very extended part of the city. As a special treatment, in particular during the hottest afternoons, the workers were served a special snack consisting of raw bread (gallette) and accompanied by a wine-based drink stretched with a bit of fresh water. Another legend says that the birth of the Spritz doesn’t come from the Italians. It is said that the Austrian soldiers were practical in mixing the white wine with water in order to lower its alcohol content.
The Austrian palates were not accustomed to a level of gradation as high as that of the Venetian wines, for this reason they often used the sparkling water.
The name ‘Spritz’ seems to derive from the Austrian/German verb ‘spritzen’, translated into Italian as ‘spray’. This term recalls the gesture of the sparkling water poured into the glass during the preparation of the aperitif.

When you have the opportunity to visit Venice, the city that most characterizes the Aperol Spritz, you certainly have to try the traditional and funny ‘Bacaro Tour’. This is a tour among the characteristic ‘Bacari’ (small bars and taverns in Venetian style) where you will be tested by the strong flavours of the Venetian cuisine. While drinking your glass of Spritz, you will have the opportunity to eat the traditional ‘cicchetti’: a finger food born in the city of Venice as an alternative to the usual fries and olives. With a shot of Spritz and an appetizer, while walking through the streets of this magical city, you will be overwhelmed by the uniqueness and beauty of Venice.

Are you enchanted by the story of one of the Italian drink par excellence? Now you just need to taste it, better if shared with good friends! Have a good ‘Spritz’ and enjoy your aperitif!