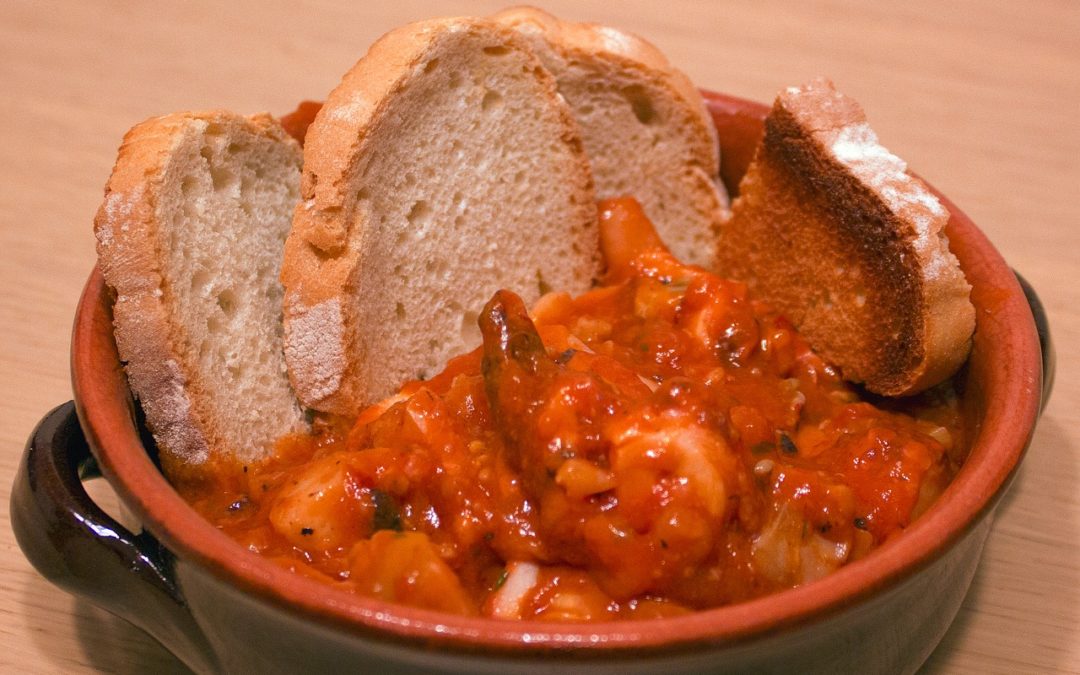 Caciucco is a typical fish stew of the culinary tradition of the western coastal towns in Tuscany. There are two versions of the Caciucco: one recipe comes from Livorno and the other from Viareggio.

Caciucco is a fish stew made of different types of fish, generally of crustacean, molluscs, octopuses, cuttlefishes, slipper lobsters, and other types of fish that were considered poor. They are usually cooked separately (due to the different cooking time) and then mixed in a tomato sauce, served with some slices of garlic toasted bread.

The recipe of the traditional Caciucco involves about 13 species of fish. However, the species of fishes that are used, are about 6/7 since it changes due to the catch of the day. Therefore there are no strict rules about the types of fish that must be used to prepare this dish, but a subjective choice of the best soup fishes.

There are various legends about the origins of the Caciucco.

According to some rumours, Caciucco is the symbol of popular generosity, a dish born from the catch of the fishes offered by fishermen to the family of one of their companion dead during a storm at sea.

By another legend, this dish represents the origins of Livorno inhabitants, belonging to different congregations (Jewish, German, Portuguese, Armenian, Anglican etc). As a consequence Caciucco should represent the merger of their cultures, religions, and culinary traditions.

The ingredients are more or less the same, what differs from the two recipes is the cooking method.

Livorno’s Caciucco preparation starts with chopping and frying onion, garlic, parsley and chilli. Then everything is doused with the wine. When the wine has evaporated, add the tomato sauce and the fishes in decreasing cooking-time order. With the fish leftover, we can prepare the broth that can be used in case the sauce would dry up.

To prepare the Caciucco of Viareggio we start by cooking just the chopped garlic with chilli, then we add the wine, water, the fishes and after all of them, we can add the tomato sauce or the diluted tomato concentrate.

The substantial difference between the two variations lays in the fact that Livorno’s Caciucco seems to be a thick and creamy fish stew to be poured on some slices of garlic toasted bread while the Caciucco of Viareggio, is more liquid. It is usually considered a broth with fishes and tends to be served without toasted bread.

Photo by akiragiulia from Pixabay