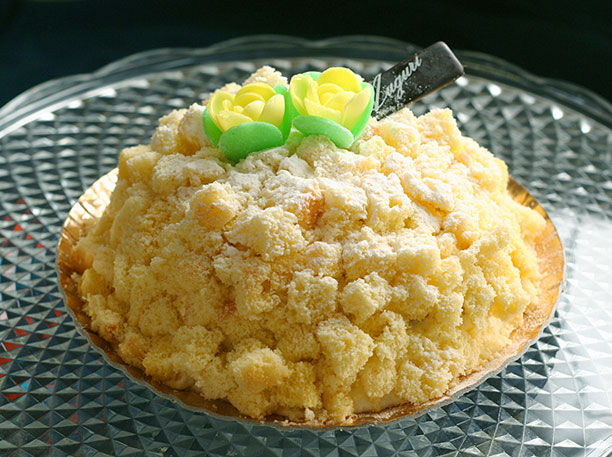 A dessert for all women in the world, inspired by the mimosa flower

8th March is a special day for women as it’s International Women’s Day!

Women are celebrated with a flower called mimosa, from which the cake takes its name: little yellow pieces of sponge cake decorates and simulate the bunches of mimosa on this dessert.

Let’s remember the women with a very special dessert

The recipe of the Italian Torta Mimosa is rather recent, introduced in the early 1950s. This cake was created in Rome on the occasion of Women’s Day and was conceived from the outset as a culinary symbol of this feminine festivity. Another theory tells that the origin of this cake is from Rieti. There, according to the stories, the innovative chef Adelmo Renzi proposed the famous cake in his restaurant for the first time. In 1962, the chef took part in a cake exhibition in Sanremo and won. The mimosa cake was considered the perfect dessert to pay homage to the Ligurian town, already known as the city of flowers. And since the mimosa flower was the symbol of the International Women’s Day, the cake was immediately associated with this occasion.

A lot of different types of Torta Mimosa

Nobody knows the original recipe of this cake because Adelmo Renzi never confessed it to anyone. A lot of people tried to replicate it but with bad results. That’s why nowadays we have a lot of variants of this pie. The most known are Chocolate Torta Mimosa, Lemon Torta Mimosa, and Pineapple Torta Mimosa.

To prepare Torta Mimosa first prepare the two sponge cakes. Break in a bowl the eggs and start mixing with the electric whips. Cut both vanilla pods, scoop out the seeds, add them and mix together with a pinch of salt. Now slowly add the sugar to the mixer. Continue mixing for 15 minutes until the mixture is smooth and creamy.

Place a sieve directly over the bowl. Sieve both the flours and gently incorporate them into the mixture with movements from the bottom to the top using a spatula. Once you have a smooth dough, butter and flour two (20 cm diameter) cake tins. Divide the mixture equally between the 2 cake tins and cook them on the lower floor of the oven (160° preheated) for 50 minutes. After 50 minutes let it cool down.

Now let’s see how to make the filling cream. Cut the vanilla pod, scoop out the seeds, and set aside. In a pot put the milk, the fresh liquid cream, the empty pod, and heat until it comes to boil. Meanwhile in a bowl beat the egg yolks with the sugar and the seeds of the pods. Pour into the dough the maizena (sieved) and mix. As soon as the milk is hot, remove the pod and pour a ladleful into the egg yolk mixture, stirring with a whisk. Pour the dough with the hot milk and, without ever stopping stirring, let it thicken over a gentle heat. When the custard will be ready, put it in a shallow oven dish and leave it cooling by covering it with the plastic film.

When it’s cold, put in a bowl the fresh liquid cream and the sugar and start mixing. When you will have one well-whipped cream, add this cream to the custard. Cover it with the film and put it in the fridge for 30 minutes.

Meanwhile, prepare the liqueur syrup. Put in a pot the water, Grand Marnier and the sugar. Turn on the heat and stir until the sugar dissolves. Then let it cool down transferring it to another bowl.

Let’s compose the cake! First of all, you have to remove the outer crust from both sponge cakes. Take one of the two sponge cakes and cut it into 3 discs. Put the first layer of sponge cake on a plate then put one spoon of liqueur syrup and then the cream. Place the second disc, moisten again and cover with another layer of cream as done in the previous step. Let’s do the same thing also with the last disc. Use the remaining cream to cover the borders of the cake.

Cut into small cubes the other sponge cake and with a spoon spread them over the entire surface of the cake. Put the cake in the fridge at least for 2 hours. Spread the surface with powdered sugar before serving.