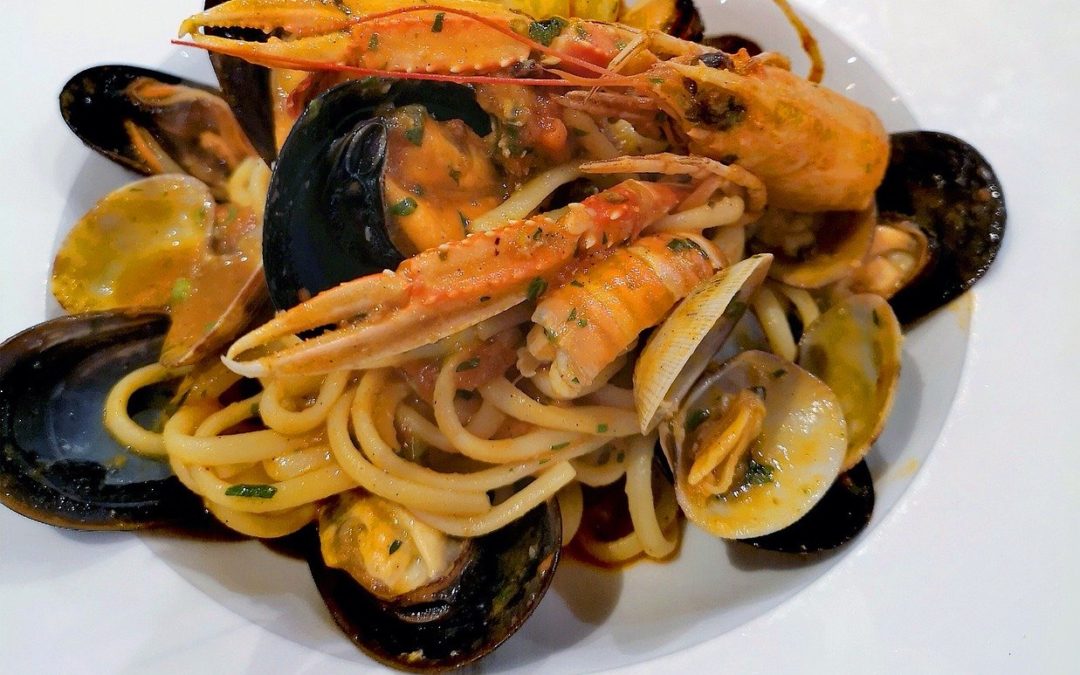 Seafood spaghetti is the typical dish that characterizes Italian seaside towns. South Italians maintain their leadership as the best in cooking seafood.

Seafood spaghetti is a typical dish of the south-Italy cuisine, in Italian it is known as ‘spaghetti allo scoglio’ (at the cliff, in English). They got this name since, in the past, this dish was made of small cliff pieces stir-fried in a pan. During the cooking, alive “small marine animals” jumped out. The dish was completed removing the stones and adding the pasta to the pan. From this dish many variations were born, as there was no real rule to follow for cooking seafood. As a consequence, there are many variations of this dish, in particular almost every south Italy seaside town has its own variant of seafood spaghetti.

Recipe of the Neapolitan seafood spaghetti

a glass of good white wine

Start by opening all the mussels and clams heating them in a pan. Add a clove of garlic and a little olive oil, add the seafood and cover with a lid. After a few minutes take off the lid: you will see that the mussels and clams are open. Set aside the seafood (remove the shell, but keep some to decorate the dish). Keep the cooking water then take another pan, add some oil and the remaining garlic. Add the squid cut into slices and the peeled shrimps. Cook them for 30 secs and then add the cherry tomatoes. Simmer them, douse with the wine and let it evaporate. Lower the flame and add the seafood with some of their own water, it will give much more flavour. Add salt and pepper to your taste, but be careful with the clams because they already are savoury. Now it’s time to cook pasta in salty water and drain it when al dente. Pour it in the pan with the seafood sauce, stir it to bind the flavours. Add the chopped parsley at the very end. Place the spaghetti and add the closed-shell to decorate the dish.

Now you can taste the flavour of the sea of Naples!

Photo by Denis Doukhan from Pixabay