Roman Supplì, a hot melted heart of mozzarella inside with crispy rice and breadcrumbs crust on the outside. 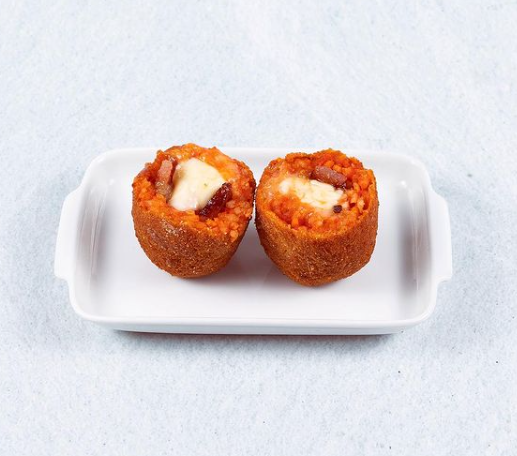 Supplì and some of its curiosities

Do you know the difference between Arancini and Supplì? They seem very similar but they are actually quite different from oneanother. They are both a rustic street food speciality, but weather Supplì are a regional recipe from the Lazio region – specifically from Roman – Arancini/e are typically from Sicily. Supplì are made of cooked rice in a meat sauce. The rice is used to form elongated balls with a small and melted cube of mozzarella in the center. Supplì is known, prepared, and loved all over Italy – although with different recipes – and abroad. It has an ancient history and its name comes from the French word ‘surprise’. The first Supplì in history was cooked in 874, at the Trattoria della Lepre, a place that is famous and known even by top artists; in this trattoria, it was first proposed on the menu as an appetizer, although nowadays you can also enjoy it as a main dish.

A lot of ways to cook Supplì

Although the recipe is always based on rice, there are many variations of this dish! Let’s see together the most famous ones. Arancini from Sicily, Roman ragout Supplì which are covered in a water and flour compound and then deep-fried, fantasy Supplì and Arancini that want the addition of spicy salami or ham, radicchio and gorgonzola Supplì, taleggio and speck Supplì, and Seafood Supplì whit seafood inside.

First of all, you have to make the ragout based on minced meat, red wine, and tomato sauce. Cook the rice directly in the ragout, diluted it with vegetable stock. Allow all the cooking liquid to drain off. Season the rice with salt and pepper, then transfer it into a bowl and leave it to cool well.

Cut the mozzarella into strips or cubes. Take a handful of rice with your hands and place a little mozzarella in the centre, closing it so that the supplì has an oval shape.

Beat the eggs and dip each Supplì first in the egg and then into the breadcrumbs, taking care not to break them. Heat the oil well and cook the Supplì until they are golden brown on the outside. Drain them and serve them still hot. Enjoy and eat your homemade Supplì together with your friends!