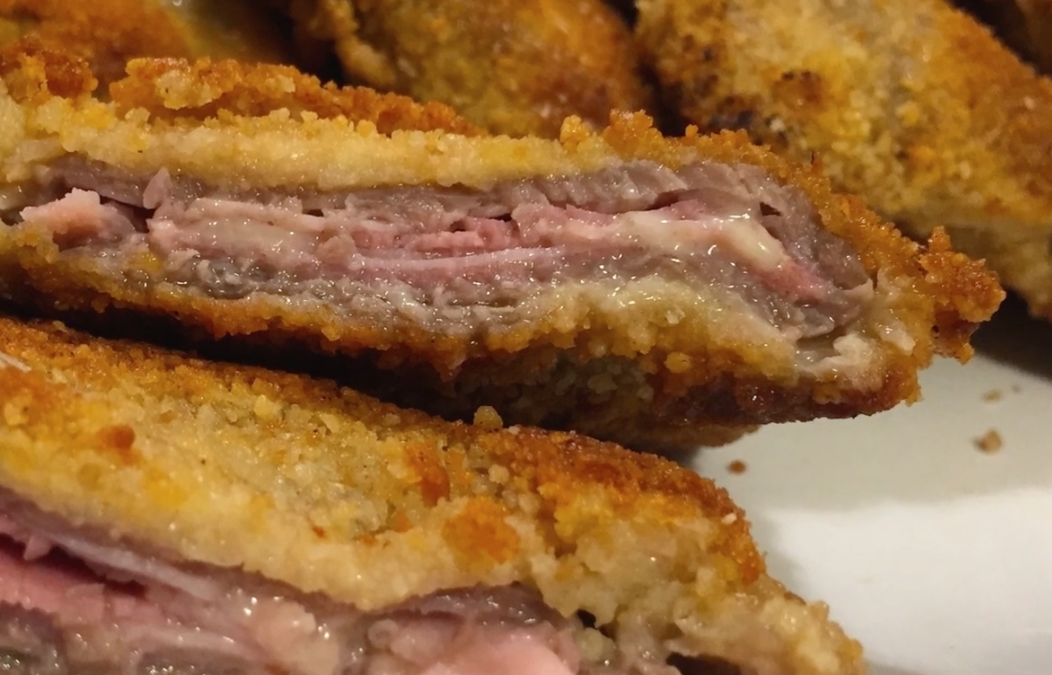 The perfect dish for the greediest

Cotoletta alla Valdostana is one of the most typical dishes of Aosta Valley cuisine. This recipe is known all over Italy and also abroad. This second course is perfect in Autumn or Winter period because of the fatty ingredients. In this recipe there is one of the most typical ingredient of the region: fontina cheese. Together with the other ingredients, it combines an unmistakable flavour.

A bit of history of one of the mainly ingredient: Fontina

This greedy recipe, as we said before is embellished with a typical product of the region: fontina cheese. This type of cheese is obtained only from the milk of cows of the Aosta Valley breed and has ancient origins. Based on some sources, this cheese is prepared following the same recipe since the 13th century. The Fontina cheeses need three months maturing which is done in natural caves, to give the characteristic aroma.

As every regional and traditional recipe, also Cotolette alla Valdostana has its variants. Someone chooses the veal meat with the bone and other people don’t. In some variants, people use breadcrumbs and also flour and aromatic herbs for the breading or use chicken meat instead of the veal. There are also vegetarian options, that replace meat with vegetables (usually grilled aubergines) and avoid the ham. A very popular variation of this recipe wants the addition of truffle flakes along with fontina cheese and ham that give a unique flavour to the dish.

To prepare Aosta Valley’s cutlets, first of all you have to thin the veal slices with a meat mallet. Slice the fontina cheese. Lay in the center of 4 slices of meat one piece of fontina and one of ham. Cover them with the other 4 slices of meat and press to adhere the edges. Mix 2 eggs in a bowl adding salt and pepper and pour the breadcrumb in a plate. Dip the meat first in the eggs and then on the breadcrumbs to obtain an even coating. Fry the cutlets in a pan with plenty of butter, until they are golden brown on both sides and place on absorbent paper to remove excess grease.

Serve and enjoy them still hot and let yourself be carried away by the traditional taste of Valle d’Aosta.