Strozzapreti and Strangolapreti, two bizarre names for a special pasta 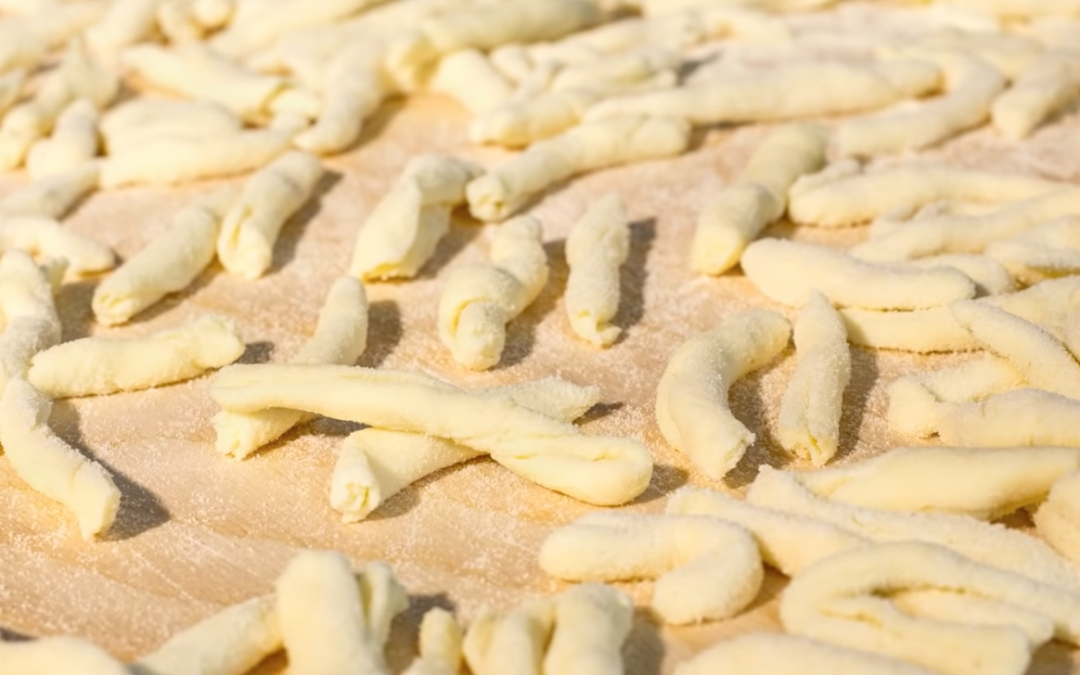 Strozzapreti and Strangolapreti, the “priest-choker” and the “priest-strangler”, may be the weirdest-sounding couple of names in the world of Italian pasta creations.

Among the hundreds of pasta shapes you can enjoy all across Italy, one of the most unique is certainly the Strozzapreti or Strangolapreti, the “priest-choker” or “priest-strangler” in Italian. This type of pasta with such a curious name is typical of the central regions of Italy, but its real homeland is Emilia-Romagna; the stories and legends lying behind this recipe are countless and very diverse, but all of them have one thing in common: they all address and confirm the anticlerical feeling conveyed by the name of this dish.

The original Emilian recipe for this pasta is very simple and does not require eggs as it is made of flour, water and salt; however, over time many regions have developed their own versions of Strozzapreti or Strangolapreti: while sometimes these two terms can be used interchangeably, in many cases they refer to quite different adaptations of this delicacy.

Many stories for two unusual names

The history of this pasta and its names is strongly connected to the political history of the country: its origins date back to the domination of the region Emilia-Romagna by the Papal State but the first written reference to this recipe is to be found only in the 16th century. According to one of the most popular legends this dish originated from the custom of the Church to collect, among the huge taxes imposed to the subjects, all the eggs produced by the peasants, leaving them to make a living solely on water, salt and flour. Therefore, people used to consume this form of pasta while thinking about the rich priests in not very friendly terms.

Another possible origin of this name is the very shape of the Strozzapreti: it is a slightly elongated, hand-rolled form of pasta which can make the swallowing a little complicated and the reputation of the priests’ gluttony made commoners think they could choke while voraciously eating their abundant meals.

Other stories attribute the reason for this name to the action of “choking” the dough strips that is necessary to give them their characteristic shape, or to the habit of Romagna women of inviting priests for lunch, making their husbands wish to see the guests choke.

Although the terms Strozzapreti and Strangolapreti are commonly considered interchangeable, they are more specifically used to distinguish two different recipes across Italy. Indeed, besides the original recipe from Emilia-Romagna, more properly called Strozzapreti, there are many versions of this pasta all around the country: in the southern regions Campania, Lazio and Calabria Strangolapreti (or Strangulaprevati in the dialect of the area) is a type of potato gnocchi; in Umbria and Lazio Strozzapreti is the name of a long pasta similar to spaghetti and tagliatelle; in Tuscany, the same name is used for gnocchi made of spinach and ricotta cheese. However, the most famous adaptation is probably the one found in Trentino-Alto Adige: here the name Strangolapreti is used for a type of gnocchi made with spinach, stale bread and parmesan.

In order to prepare the dough, place the flour on a board and add a pinch of salt. Slowly pour the water and start kneading with your hands until a rather consistent but homogeneous dough is formed, then let it rest in the fridge for 30 minutes. After that, roll it out with the rolling pin until it reaches the thickness of about 2 mm; cut the dough in strips 1,5 cm wide and proceed rolling up the strips of dough between the palms of the hands and cutting them in pieces of 8-10 cm in length.

Fill a pot with water and bring it to boil, add salt and pour in the Strozzapreti. Cook for about 6-7 minutes, drain and serve the Strozzapreti as you wish: with sausage and parmesan, ragù alla Bolognese or any other sauce you are craving for!