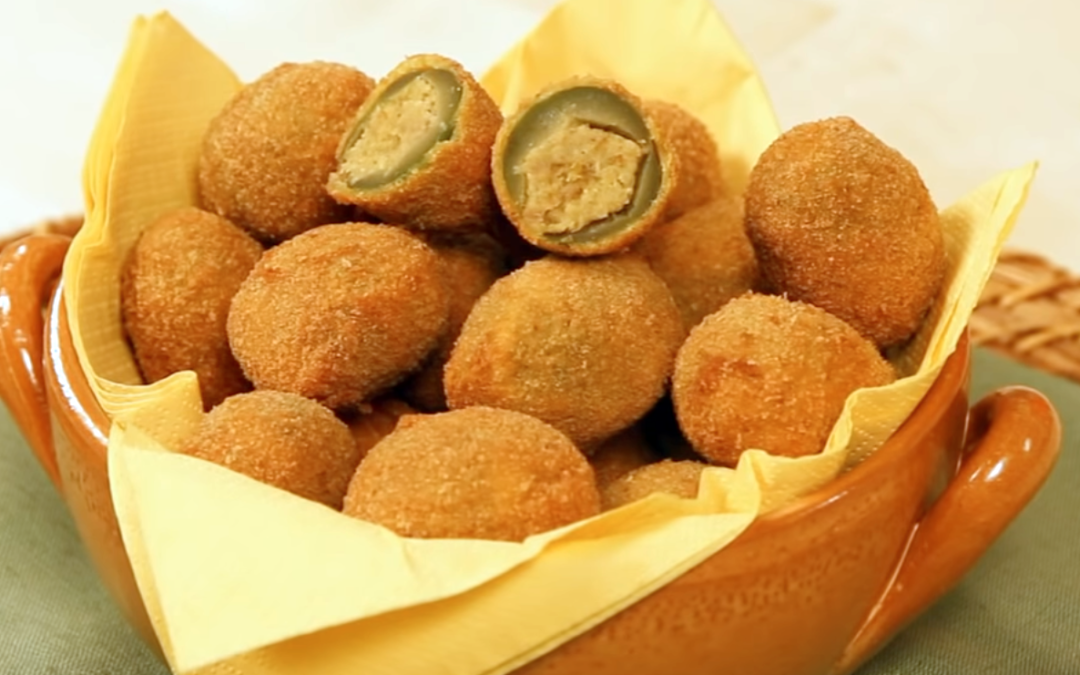 Olive all’ascolana is one of the most known dishes of Italian cuisine, originally from Marche. This recipe is traditional and representative of this land but they are appreciated and known all over the world. They are generally served as an appetizer together with other fried delicacies, but traditionally they are considered as a second course because they are Marche’s main dish of the “mixed fry”: large breaded green olives, stuffed with a soft meat mixture.

The perfect type of olive to use for this tasty recipe is Oliva Ascolana del Piceno (DOP) which is an Italian product with a protected designation. To be entitled “Oliva Ascolana del Piceno”, olives must be produced in an area that includes most of the provinces of Ascoli Piceno and Fermo and part of the province of Teramo. The product was awarded the protected designation in 2005.

Olive all’ascolana got their name from the city of Ascoli Piceno. This recipe’s history can be traced back to Roman times, but only in the 19th century the chefs started serving this special olive stuffing to the noble families of Ascoli. They had a large quantities and variety of available meat and there were no easy ways for preserving food: one way was not wasting food, reusing it for different recipes.

Some variants of this interesting recipe

The ingredients for olive all’ascolana are simple: olives, meat and bread crumbs. But playing with the raw materials, many other versions were invented, perfect for aperitifs and buffets, different from the usual. A popular variant in the areas of San Benedetto del Tronto is the fish olive ascolane: in this recipe, fish replaces meat. The vegetarian option has vegetables and mozzarella stuffing and the vegan stuffing is based on lentils blended together with chopped carrots and onions, nutmeg and cornflour.

To prepare the original recipe let’s start cooking the meat. Put in a pot the oil and the vegetables and the meat. When browned, add white wine and salt. Let them cook for 20 minutes then take off the flame and passed through a meat grinder and flavored with nutmeg. Add the egg and cheese until it forms a compact mixture and then cover it.

Stone the olives into a spiral, remove the stone and fill with a little meat mixture and reform the olive by rolling it around the meat.

In three different bowls put in the first one the beaten eggs, in the second one the plain flour, and in the third one the breadcrumbs. Dip the olives in flour, then dip them in the egg. Drain them and dip them in breadcrumbs. Once all are ready, fry in hot oil at a low temperature until golden brown.