Sardinian Culurgiònes, a delight for the palate 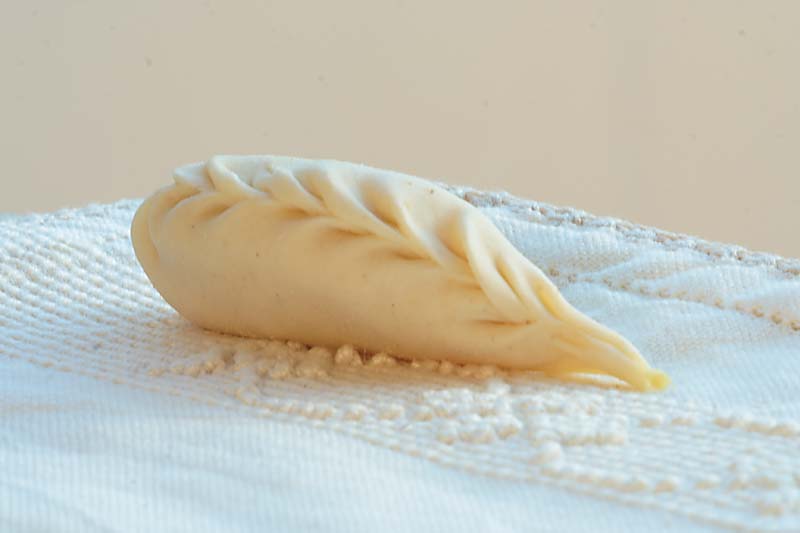 Culurgiònes are a typical dish of Sardinia cuisine. It is a stuffed pasta also known as angiulotus (agnolotti). This pasta is filled with potatoes, pecorino cheese, and mint; a typical culinary specialty of the Ogliastra region (central-eastern region of Sardinia). The characteristic of Culurgiònes is their closure. It is reminiscent of an ear of corn and is specially made to hold the delicious mixture that makes this pasta a real delicacy. Since 2015, Culurgiònes have been recognised among IGP “Prodotto a Indicazione Geografica Protetta” (Protected Geographical Identification) products.

Some interesting facts about the history and tradition of Culurgiònes

There are two explanations for this name: one is that the term Culurgiònes may derive from the term ‘culleus‘ which means ‘leather bag’. The name may also derive from the term ‘cuna‘, which means cradle and ravine. The tradition of this recipe is ancient and comes from the rural and poor Sardinia cuisine. Until the 1960s, women made them for 2nd November, the day of remembrance of the beloved who passed away, but according to tradition, these little ravioli were also an excellent amulet to protect against death and the evil eye in general. Also, it seems that Culurgiònes was prepared on the occasion of the celebration to propitiate the wheat harvest and that their shape is dedicated to this very important event in the villages.

One region, many variants

The peculiarity of Culurgiònes is in the cheese: it is a particular and tasty mix. Some recipes use only fiscidu cheese (a local salted pecorino), while others add other types of pecorino and goat’s cheese. In other parts of the island, Culurgiònes can be seasoned in other ways: for example, in Tortolì, the filling is made of potatoes and onions, with a little cheese. Other variants see Culurgiònes stuffed with ricotta or ricotta flavored with lemon or orange; in other cases, the filling is cheese and Swiss chard, onions, and Sardinian saffron. Traditionally, Culurgiònes should be served with tomato sauce and grated pecorino cheese, but they can also be served plain, with extra virgin olive oil and grated pecorino, or baked or fried without any seasoning.

INGREDIENT FOR THE FILLING

INGREDIENTS FOR THE SAUCE

To prepare the Culurgiònes, let’s start with the filling of our ravioli. Put a peeled clove of garlic in infusion in oil for 8 hours. After this time remove the garlic. Put the potatoes in a pot with boiling water and after 30/40 minutes check if they are cooked, with a fork. Peel the potatoes still warm and mash them in a bowl and leave them to cool completely. Add the pecorino cheese and mint leaves, mix and add salt and pepper. Add the garlic-flavored oil, cover the compound with film and let it rest for a night in the fridge.

Prepare the dough starting to pour in a bowl the flours, oil and knead with a fork. Transfer the dough to the table and knead with your hands for other 3 minutes, until it is smooth and homogeneous. Cover it with plastic film and let it rest for 30 minutes.

Place the dough in a rolling machine. You will have to roll the dough from the widest to the penultimate thickness, so add a pinch of flour from time to time, if necessary, to prevent the dough from sticking to the rollers of the machine. Gradually divide it into smaller rectangles and then use a 9 cm wide pastry cutter to form small discs.

Take a disc between your thumb and forefinger, place the filling in the middle, squeeze gently to flatten the mixture slightly, and staple the base. Then pinch with your fingers, picking up the end and bringing it first to one side and then to the other until you close the other end, thus obtaining the classic herringbone closure.

Put in a pan oil, a clove of garlic and after few minutes add the tomato sauce, salt, pepper, and basil leaves. After 30 minutes remove the garlic.

Meanwhile, cook your Culurgiònes, a few at a time, in boiling and salt water. After 5 minutes, when they come to the surface, they are. ready. Put the Culurgiònes on a plate and season with the sauce and some basil leaves.