Peperoni ‘mbuttunati from Naples with love 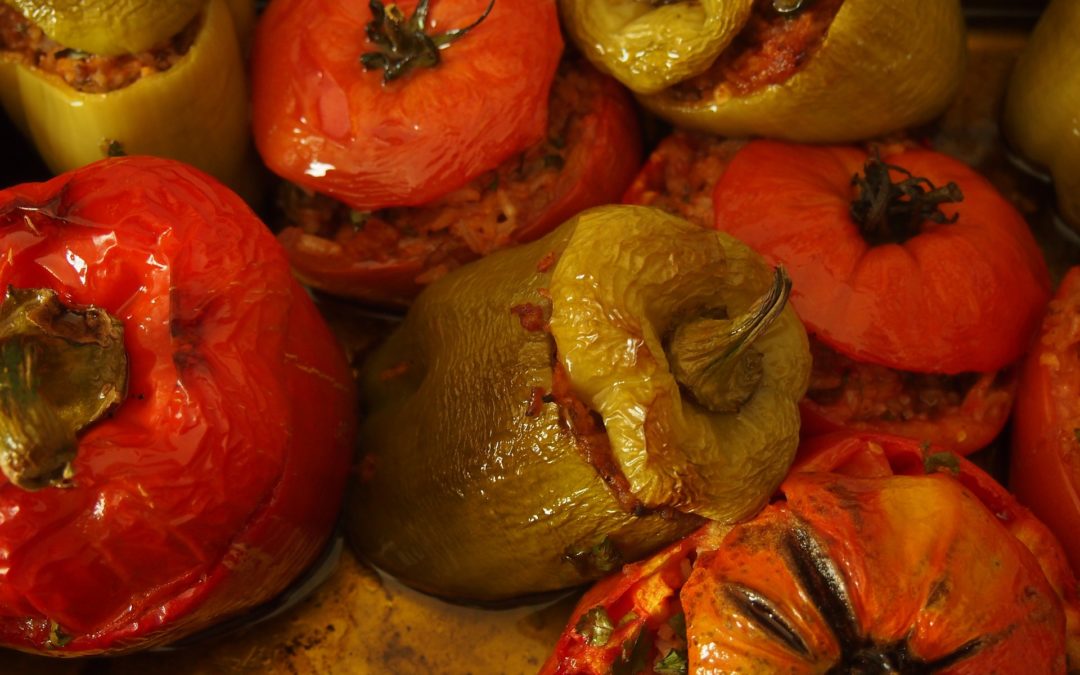 Peperoni Imbottiti (stuffed peppers) and curiosities on this recipe

The peperoni ‘mbuttunati is a traditional recipe from Naples and Campania region. They are known also as puparuoli ‘mbuttunati. This second course is substantial and tasty. This recipe was born from rural and poor cuisine. The peppers, in fact, once roasted, were filled with whatever there was to eat: stale bread, capers, and a few anchovies. Over time, however, the recipe has been enriched with other ingredients, such as fried aubergines, leftover meat, pasta, rice, and minced garlic, becoming a refined and tasty preparation that pays homage to Mediterranean flavours at their best. There are two ways to cook this recipe: the first with a filling of fried aubergines, olives, anchovies, and stale bread, and the second with a filling of vermicelli (a type of pasta similar to spaghetti). The peperoni imbottiti with vermicelli was the typical takeaway lunch of the street vendors who drove their carts through the streets and alleyways to sell their wares. During the Belle Époque period, around the end of the 19th century, the restaurants of Marechiaro and Mergellina and various trattorias included them on their menus.

There are several variations, concerning both the type of filling (which can be made with any ingredients you like) and the type of vegetable used as a ‘container’ (from aubergines to courgettes). Some traditionalists of Neapolitan cuisine suggest using the ‘papacella‘ for this recipe, which is a variety of pepper typically found in Campania, with a short, round body and a yellow or red color. Therefore it is a popular dish, and because of the huge versatility of the ingredients, there is no single recipe for it today.

To make the peperoni imbottiti, start by roasting the peppers on the flame for at least 10 minutes, turning them sometimes (if you don’t have a flame spreader, you can roast the peppers on a very hot pan). Place the peppers in a baking dish, cover with film and leave for 15 minutes, then remove the skin from the peppers.

Meanwhile, cut the bread, dice it, and sting the olives with a knife. Put the brad in a mixer with the basil and parsley leaves, the olives, and the capers. Add the clove of garlic (without peel), and the egg. Blend the mixture until it is smooth and compact.

Take the peeled pepper, remove the top, and extract the internal seeds. Oil an oven dish, place the peppers in it, and stuff them with the prepared filling. In a bowl, mix the grated Parmesan cheese with the breadcrumbs and spread the mixture over the peppers, and drizzle with oil.

Cook the peppers in the oven (preheated 180°) for 35 minutes. When cooked, the peppers will be golden brown on the surface. Let them cool and then serve and enjoy your Neapolitan peperoni imbottiti!