Seadas, the intense flavour of Sardinia 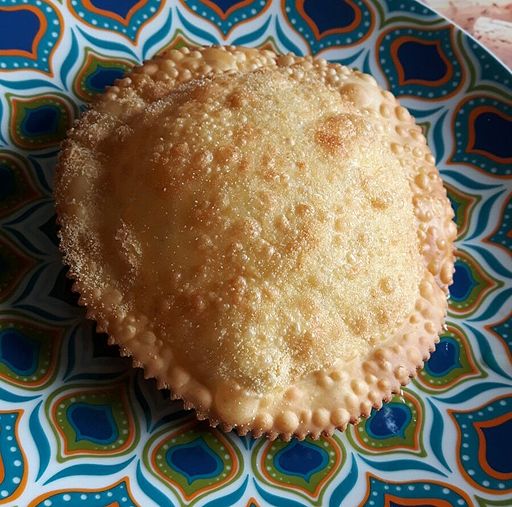 The Seada is a typical dish of traditional Sardinian cuisine. It is a famous fried sweet: a pastry enclosing a soft and tasty filling that honours the typical flavours of the island, with its fresh pecorino cheese and a twist of acidic taste and lemon zest, giving it that fresh touch that distinguishes this dessert. This traditional dish has been recognized as P.A.T product. Traditionally, Seadas are eaten hot and garnished with chestnut honey, a type of honey with a dark colour and slightly bitter taste. Between sweet and savoury, Seadas encapsulate an experience of unique aromas, scents, and flavours.

Sardinian Seada is a dish derived from rural poor cuisine, using simple and easily available ingredients. There are several hypotheses about the etymology of the name of this sweet. In 1479, Sardinia was under Spanish dominance and, according to some sources, the origins of the word Seada date back to that period. It seems that the name of the dish derives from the Spanish word cebar, cebana in the past participle, which among possible translations also includes the Italian verbs ‘cibare‘ and ‘alimentare’. Another theory is that Seada can be linked to the Latin expression sebum, referring to the custom of using animal fat as one of the ingredients in the preparation of the dish.

Some ways to cook Seadas

There are some different varieties of this sweet. The semolina can be replaced by plain flour and the lemon peel with orange peel, giving the Seada a bitter citrus aftertaste. Some also prepare it with raw cheese, simply cut into slivers and mixed with lemon peel. A variant of the Seada common in some areas of Sardinia is the salty one, which is served as a second rather than as a dessert. In this case, the recipe is the same but, instead of lemon and honey, it is seasoned with salt and parsley. Some people prefer baked Seadas, so a lighter variant, since the original recipe wants them fried in hot oil.

INGREDIENTS FOR THE FILLING

Let’s prepare our Seadas!
Put in a bowl the flour (sieved), the egg, and water. Start mixing with your hands. Add the lard a little at a time, continue kneading to mix it in. When the dough will be fairly compact, transfer to a lightly floured table and continue to knead until it gets smooth and elastic. Wrap the compound with the film and let it rest for 30 minutes.

Meanwhile, prepare the filling. Grate the peel of one lemon and keep it aside. Grate the pecorino cheese with a wide-hole grater and transfer it to a small saucepan. Add some water and melt it over moderate heat, stirring continuously, it will take about 8-10 minutes. When the cheese has melted, flavour it with the lemon zest and pour it onto a cutting board, spread it out with a spatula and leave it to firm up, then use a round pastry cutter with a diameter of about 9 cm to form a ring and get 12 discs.

Take the dough ball and roll it out by hand or with the help of the machine, rolling it out to a thickness of 3 mm. Place the cheese disks well spaced out on the sheet and cover with another sheet of dough. Press the pastry around the filling with your fingers. Cut out the individual Seadas with a wavy-edged pastry ring 10,5 cm in diameter and discard the waste dough.

Let proceed with the cooking. Heat in a pot the frying oil and when it’s warm, cook one Seada per time. Cook for a pair of minutes, then drain them with a slotted spoon and place them on a tray lined with paper towels to dry the excess oil. Transfer the Seadas to a serving dish, garnish with honey while still warm, and serve immediately.