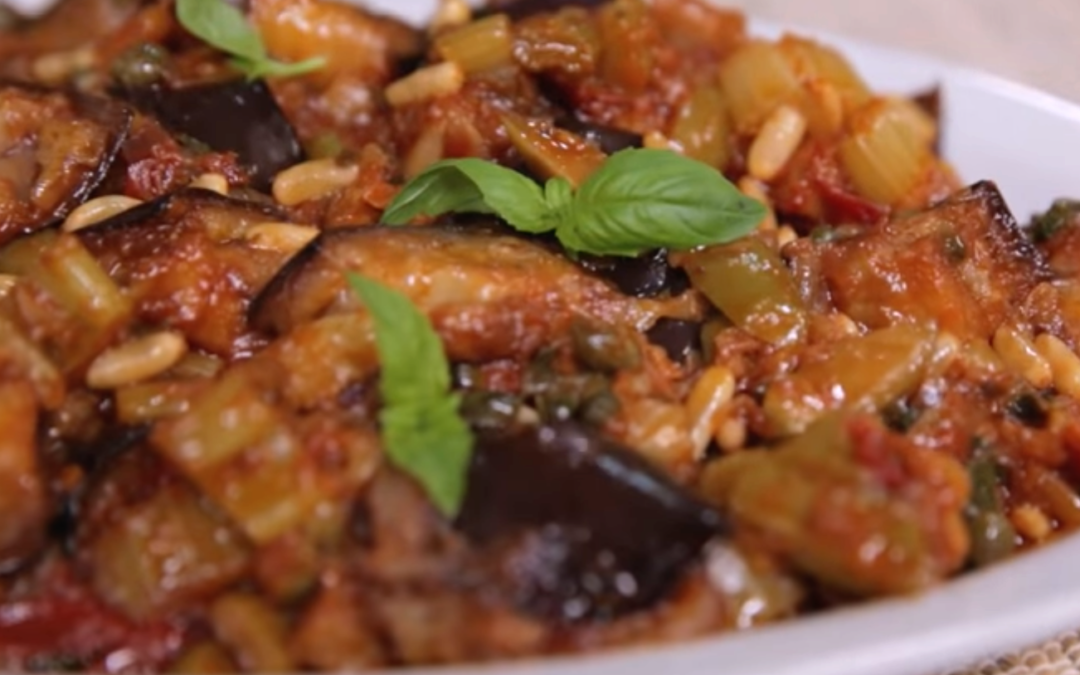 Caponata (Capunata in Sicily’s dialect) is a typical and traditional dish of Sicilian cuisine that comes from the rural traditions. It is a mix of vegetables and tomato sauce, similar to a ratatouille, very well known all over Italy. This is a perfect side dish cooked mainly with aubergines, tomatoes and basil. The result is a mix of scents, colours and flavours that recall the suggestions of the splendid land.

Today, Caponata is popular throughout the Mediterranean Sea as a side dish and appetizer, but since the 18th century, this recipe has been used as a single dish accompanied only by bread. There are various legends behind this recipe. One is about the term “caponata” coming from “capone”, it refers to the prized fish named like that, which was prepared in the 1700s in a sweet and sour sauce for the aristocracy. Over time, however, the fish was replaced by aubergines because they were cheaper. Caponata could also come from the Latin word ‘caupona-cauponium’, meaning “tavern”. The tavern was a meeting place for sailors who, at the end of long and exhausting fishing trips, would refresh themselves with a piece of toasted bread seasoned with anchovies, oil, garlic, olives, and capers.

There are about 35 variants of Caponata all over Italy. From province to province, but also from family to family, everyone has their recipe. The most known variants are the Palermo, Trapani, Catania, and Messina versions with the addition or subtraction of vegetables. The less known are the Ciancianese, with artichokes, and the Bivona‘s version, with the addition of peaches and pears in season.

How to prepare Caponata? First of all cut finely the onion and the celery. Divide the olives in half and remove the olive pit. Wash and cut the aubergines in small pieces and do the same with the tomatoes. Put the pine nuts in a pan and toast them for a few minutes.

Pour the frying oil into a saucepan, let it heat up and fry the aubergines (a few at a time) for few minutes. Once they are golden brown, drain with a slotted spoon and place them on a tray lined with paper towels to absorb excess of oil, then set aside.

Take another pan, pour the oil, heat it up and then add the onion. Stir well, then add the celery and the capers, the olives, the pine nuts and the tomatoes. Cover with a lid and let Caponata cook for 15/20 minutes in medium heat.

Meanwhile, prepare the sauce: pour in a bowl the white wine vinegar, the tomato paste, the sugar and mix. When the cooking time of your Caponata is over, salt it and add the sauce. Mix, turn up the heat, and stir until the vinegar has evaporated. Turn off the flame and add the aubergines and the basil. Mix well together and transfer your Caponata in a baking dish. Put it in the fridge, as Caponata is served cold or at room temperature (it will taste even better the next day!).