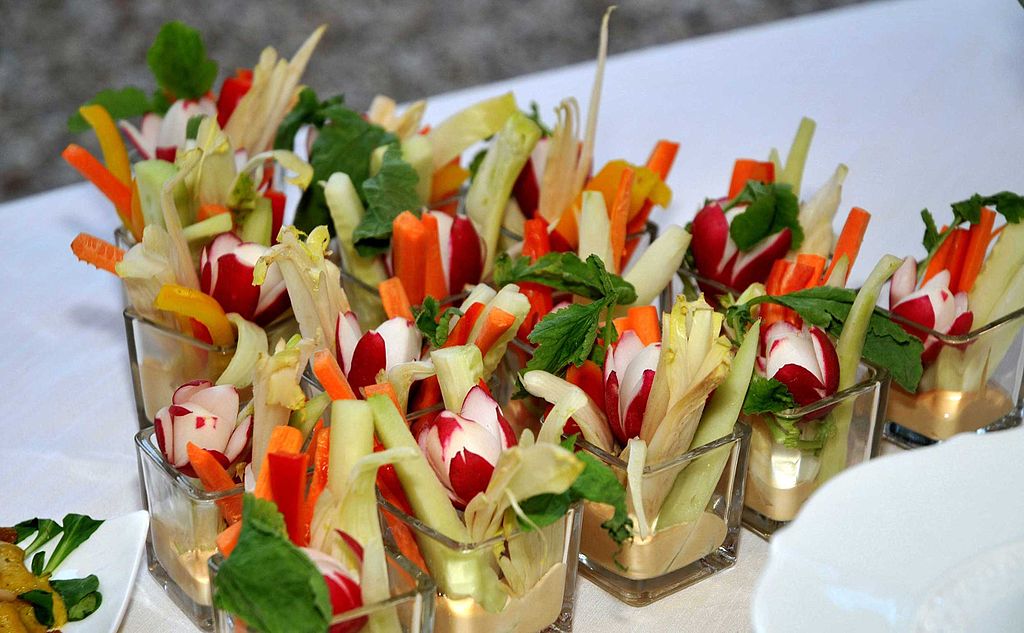 Dip raw vegetables in a sauce made with olive oil, salt and pepper and you won’t regret it!

Pinzimonio, also known as ‘zalimperio’ or ‘cacimperio’, is a raw sauce made with olive oil, salt and pepper and optionally vinegar, in which food such as vegetables (usually carrots, celery, fennel, pepper, or your favourite seasonal ones) can be dipped. This preparation is offered as an appetizer or side dish. Pinzimonio is a light, fresh, and very healthy and very classical dish. Usually, the vegetables are cut into sticks or pieces so that each guest can dip them in their pinzimonio in a small bowl. Pinzimonio is usually served in the summer but can be prepared all year round.

The name of this dish, pinzimonio, comes from the verb ‘pinzare‘ (to staple) and is an expression indicating the habit of eating raw vegetables dipped in olive oil and salt. The origins of this dish go back to the Renaissance, but it wasn’t until the 19th century that it became customary to replace sauces with olive oil. This raw condiment is also known as ‘cazzimperio‘, a Roman word meaning ‘ladle‘. In Rome, it is a typical Christmas lunch dish, useful for refreshing the mouth after eating the abundant first and second courses.

A popular variation are including gorgonzola, robiola, cream, pepper, and chopped walnuts. The result is a sauce with a creamy consistency, perfect for placing on fresh, crispy celery stalks. Another sauce, outside Italy, that is particularly popular in Greece is the so-called Tahina sauce. It is made from toasted and ground sesame seeds, extra virgin olive oil, and salt. This sauce can be used as a base for another sauce: babaganoush. But there are many other ways to prepare this sauce, such as using avocados, anchovies, chickpeas, turmeric, beetroot, and many other ingredients.

Let’s start preparing our Pinzimonio remove the celery leaves, remove any filaments by cutting a knife into the base of each stalk and pulling towards the opposite end. Cut the stalks into two parts of equal length and then make sticks by cutting the pieces lengthwise. Take the fennel, remove the two ends and the fleshy outer leaves, then cut the fennel into four equal parts and cut them in half again. Take the half peppers, remove the filaments and the white inner parts, and then cut the peppers into strips. Remove the leaves from the radishes by cutting them off at the base and wash them under running water.

Peel the carrots, trim them, and cut them into parallel slices, which you then divide into sticks. Remove the damaged outer leaves of the radicchio and keep the fresh, undamaged ones by pulling them off the base. Divide the cut vegetables into small glasses and prepare 4 small bowls with high-quality extra virgin olive oil. To prepare the pinzimonio, simply mix oil, lemon, salt. and pepper in a bowl and beat vigorously with a fork to emulsify everything. Serve your vegetable sticks with the sauce.