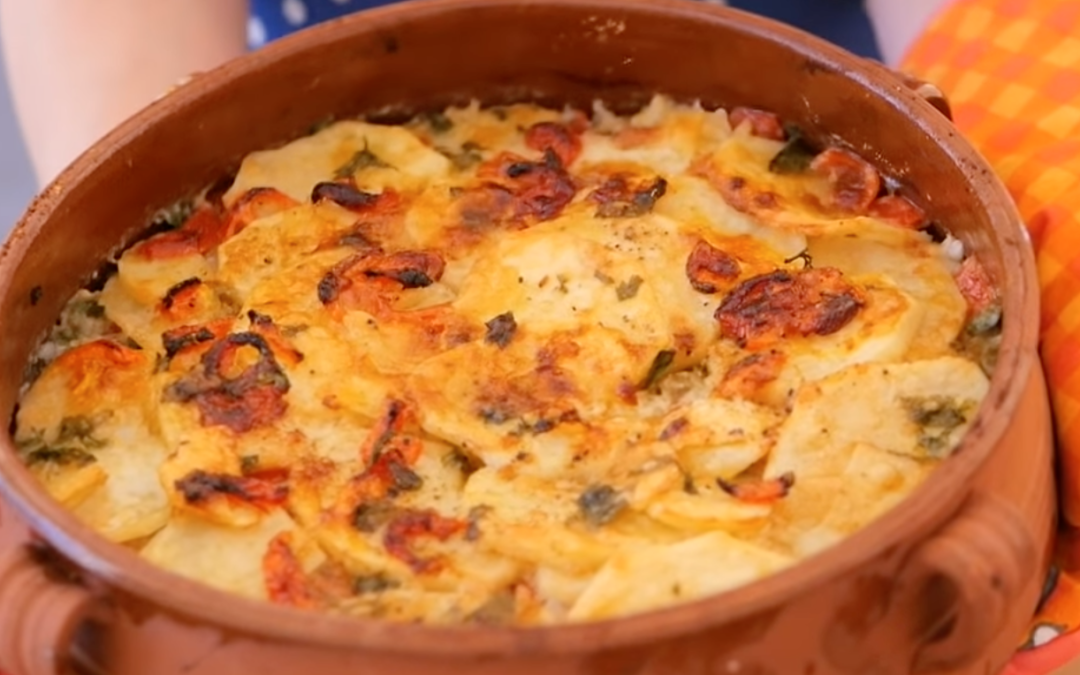 Tiella barese is an original and traditional recipe in the Apulia region. It is a dish prepared with rice, mussels, and potatoes, typical of Bari cuisine.

This specialty can be compared to paella, but the Bari way of seasoning is different from the Spanish one, bearing in mind that traditional local ingredients are used, especially the renowned Taranto mussels. Tiella is typical of the city of Bari but it is prepared, according to each family’s tradition, all over Apulia.

A bit of history and orgins of “Tiella Barese”

The origins of this recipe come from the peasant tradition, as it was a quick way to feed the family when they returned from the fields. It is said that women of the family would gather fresh or leftover vegetables and place them in a pan together with rice and potatoes. The earthenware pan used was called a ‘tiella‘, hence the origin of the name of the recipe, which was modified according to the use of what was available at home. The tiella, placed in contact with the embers, created a sort of cooking process that gave a very tasty flavour to the dish. From the countryside, the recipe traveled to the coast, encountering maritime culture and Spanish influence. This is how the mussels, still present in the Bari and Taranto tiella, were introduced into the recipe.

With a touch of imagination, many variations of the Bari Tiella can be prepared, rich in vegetables, cheese, or pulses. They are all quick and easy to prepare, ideal for a light but nutritious meal that can be supplemented with raw vegetables. 3 well-known and healthy variants are Tiella with basmati rice and vegetables, Tiella with mushrooms and leeks, Tiella with seaweed and lentils. But as mentioned above, there are many ingredients that can be used, such as octopus, courgettes, and many others.

To prepare Tiella barese let’s start cleaning the mussels: take off the “bisso”, scrape the surface with a net to remove barnacles, and wash them well under running water to remove all impurities. With the help of a small, smooth-bladed knife, open the mussels, starting at the tip and going around the entire edge of the mussel. During this operation, place a bowl under the mussels to collect their water. Using the knife, remove the mollusk from the upper valve and place it entirely on the lower valve. Remove the empty valve and gently press the mussel so that it releases all the water. When you have opened all the mussels, filter the resulting liquid through a fine-meshed sieve 6 to remove any remaining shell or sand.

Put the oil in a round baking tray and start to compose the Tiella. Put the onion and a little garlic on the bottom, arrange the potatoes in a radial pattern. Add a few slices of tomato, salt, pepper, and a handful of parsley. Arrange the raw mussels in rays, leaving a little space between them. Now distribute handfuls of uncooked rice, covering the whole surface. Gently pour all the filtered mussel water over one side of the dish. Now make another layer of potatoes and finish with the layer of tomatoes. Season with salt and pepper once more and finish with the remaining parsley. Add the olive oil, and finish with the gratin of Parmesan cheese and breadcrumbs. Gently pour water from one side of the oven dish until just below the gratin layer. Bake in a preheated oven at 200° for 60 minutes, placing the tiella in the lower part of the oven. Your Tiella barese is ready to be enjoyed.