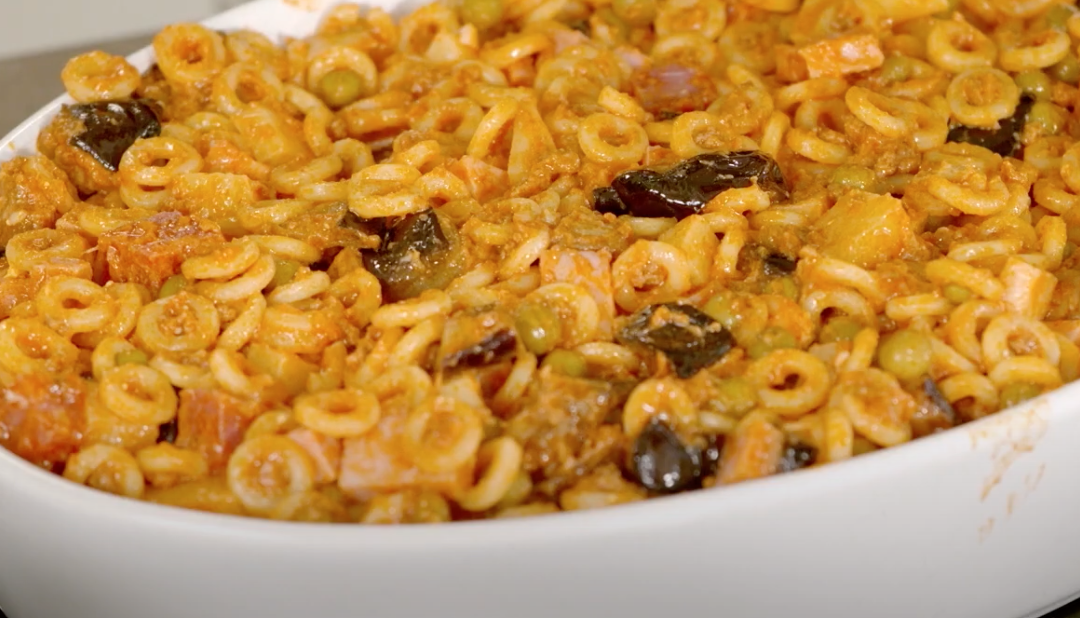 Sicilian cuisine hides a lot of culinary treasures. One example is Anelletti al forno (“a pasta u furnu” in Sicilian dialect). This is a traditional first course of this region, loved by young and old alike. The perfect dish for Sundays and festivity lunches.  It’s an original recipe from Palermo, which then spread throughout Sicily. The basis of this dish is a special ragout similar to the Bolognese one, which in the Palermo area is almost always made with the addition of peas.

A bit of history about Anelletti

The idea of perforated pasta originated in the Middle Ages. We can therefore place the birth of Anelletti in this period. According to some legends, they took the shape of the earrings that Arab women wore in Sicily. In the area between Trabia and Termini Imerese, there were important mills built by the Arabs, which is why they were probably born here. The first cooking technique developed by the Saracens was the timballo. In the late Middle Ages, however, the modern technique of boiling in a pot was adopted.

There are many versions of Anelletti al forno. Each family has its own recipe, which they jealously guard and pass on to their heirs. And the great thing is that they are all equally good. Among the many variants of this recipe, some call for the use of ham, boiled egg, small pieces of salami, béchamel sauce, some with provola or tuma cheese slices, others for mozzarella, still others for pecorino. In some variants, there is even a dispute over the use of aubergine: some want it diced, fried, and added directly to the sauce, while others prefer it without.

Prepare and cook the meat ragù, meanwhile cut the aubergines (one in pieces and the other one in slices). Leave them in a colander for over an hour with coarse salt to remove the water. Then rinse them under running water and dry them with a cloth. Fry the aubergines in a pan and when they are ready, place them on absorbent paper. Boil the Anelletti pasta in boiling salted water, drain a little before they are completely cooked, and add them to the pan. Pour a spoonful of caciocavallo cheese over the pasta, add part of the meat sauce and the fried aubergine in pieces.

Grease the baking tray, sprinkle the bottom with breadcrumbs and start composing your timballo. Put the slices of aubergine in a radial pattern on the bottom, pour half of the pasta in the tin and add some more meat sauce and the tuma cheese in pieces. Pour the other half of the pasta, pressing it down well, and place the remaining meat sauce, the caciocavallo cheese, and the breadcrumbs.

Cook the timballo in the oven (preheated 200°) for 30 minutes. Before serving the Anelletti leave to rest for a few minutes and serve while still hot.