Bombette Pugliesi… will blow your mind 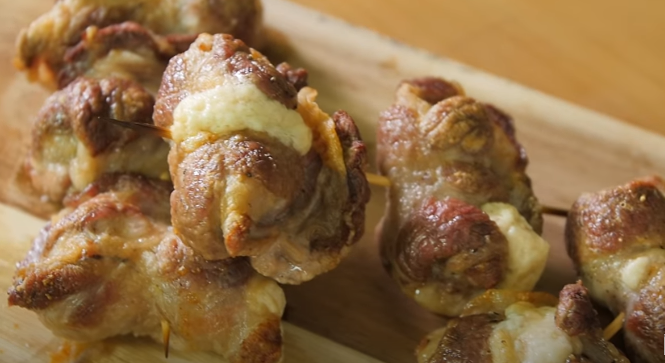 Bombette Pugliesi (meat rolls stuffed with cheese) are the pride of Italian street food and one of the most tasty finger food!

When looking for good food, you can never go wrong with what the Puglia region has to offer: here many of the recent most beloved delicacies were born and Italian restaurants worldwide have at least one Puglia specialty in their menus. However, few people are aware of the fact that a rich street food tradition can be found in this area, too. You do not need to sit in a fancy restaurant to enjoy a bite of Italian tastiness. Why? Two words: Bombette Pugliesi.

The tradition of Bombette Pugliesi was born in the Itria Valley but their actual ancestry is still contended between two towns: Martina Franca and Cisternino, both claiming to be the actual initiators of this tradition and both not to blame for their eagerness to be recognised as the motherland of such tasty delicacy.

In fact, although Cisternino is now mostly famous for this dish, its actual birthplace is Martina Franca: the origins of Bombette Pugliesi are attributed to a woman who in the 1980s first tried to cook horse steak on a “fornello”, the traditional grill used by butchers to instantly cook the meat they sold. Later on, her husband tried to substitute the horse steak with Capocollo, a particular part of the pig that added the extra tenderness and softness typical of the dish.

One bite, one flavour explosion

Bombette, in Italian, means “small bombs”, and such name is not random: these meat rolls filled with black pepper and cheese could not be better described than as an explosion of flavours. They are quite small, between 3 and 5 cm, and they are usually served stuck in a long, thin stick so they can be consumed in one single bite. The cooking technique, though, is the most important aspect of this dish: Bombette Pugliesi are to be grilled, but more traditionally a “fornello” should be used, which is a special kind of grill typical of the butcher shops in Puglia.

The original recipe for Bombette Pugliesi

Firstly, beat the meat in order to make the slices flat and homogeneous. Then lay out over each slice of meat a bacon strip, caciocavallo cheese cut in thin slices, parsley chopped together with garlic and a pinch of pepper. Roll the slices up in order to form round rolls and seal them with a toothpick. Grease an oven tray and the rolls with oil, place them in the tray and add a little bit of salt. You can also add a sprinkle of chopped parsley. Cook the Bombette in the middle shelf of the oven at 200°C for 15-20 minutes, then move the tray to the upper shelf for more 10 minutes in order to brown the Bombette. Serve and enjoy warm!