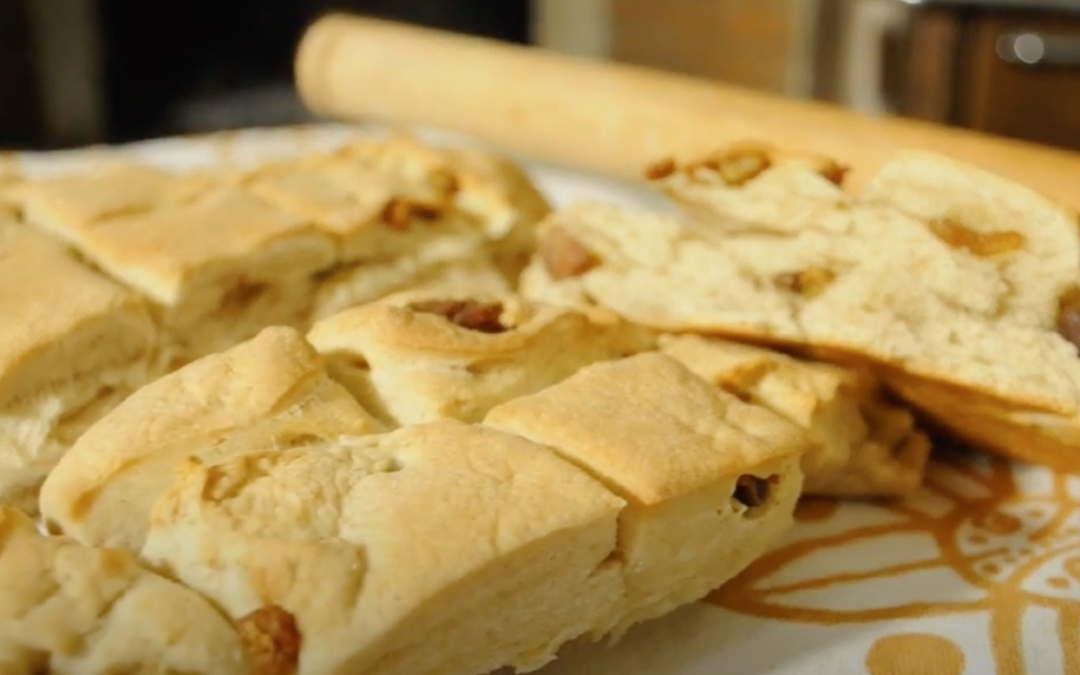 All around Italy you can try many different types of focaccias, all of which will surprise you with amazing flavours and textures. This time we want to bring you on a culinary journey to Veneto, a region in Northern Italy, to try two delicious focaccias. Here, between the Euganean Hills and the Po Delta, you can enjoy the “pinza onta” and the “schizzotto”, a sweet type of focaccia.

The pinza onta is made with flour, lard and yeast. After it is baked, it is seasoned with coarse salt and rosemary. It can also be seasoned with pork cracklings, or it can be made with the addition of corn flour, in that case is called “pinza gialla”. It goes perfectly with local cured meats and above all with “sopressa” and “bondola”. This focaccia once wasn’t prepared in the oven, but in the fireplace, placing it on cabbage leaves greased by the pork rind. It was then covered with a sheet metal lid called “testo”, which was then sprinkled with embers.

The “schizoto” or “schizzotto” is typical of the area between the Lower Padua area and the Euganean Hills. It is an unleavened bread, made with flour, goose or pork fat or butter, sugar, salt, water and grappa. The name derives from its flattened shape due to the lack of leavening of the dough. The schizzotto is mentioned in the collection of typical Paduan recipes by Giovanni Bianco Mengotti as the winning dish of a gastronomic competition held in Montagnana in 1880. It is stuffed with cured meats and cheeses, is suitable for snacks and rarely, due to the strong seasoning, replaces bread at the table.

Recipe and ingredients for the Pinza onta

Start by dissolving the brewer’s yeast in a glass of warm water. In the meantime, fry the cracklings in a pan so that the fat that covers them softens, separately melt the lard in a saucepan over low heat. Sift the flour into a bowl, add the water with the yeast in the centre, a tablespoon of oil, a pinch of salt and a little water if necessary. Add the cooled and softened pork cracklings, the previously chopped rosemary and the well melted lard. At this point, start kneading directly with your hands for about 15 minutes until a smooth and homogeneous mixture is obtained. Shape it into a ball and place it in a large bowl covered with a kitchen towel, leaving it to rise for about 1-2 hours. After the rising time, grease an oven dish with olive oil or a little lard. Roll out the dough with a rolling pin until it is about half a centimetre thick. With the tip of a knife, cut into the surface of the pinza some cuts with a large grid and place it delicately in the baking tray. Bake the pinza onta for about half an hour in a preheated oven at 200° until the surface turns golden. At the end of cooking, let the pinza onta cool and serve warm or cold.

In a bowl put the flour, yeast, sugar, salt. Mix well then gradually add the oil, grappa and water. Leave the dough inside the bowl and try to compact it a little, then turn over onto a pastry board and knead vigorously to form a smooth ball. Divide it into three parts and roll out each into an oval sheet, about 1 cm thick each: sprinkle the first with pieces of lard, spreading a little, then overlap the second, sprinkle more lard and overlap the third. Finally, give it a round shape, engrave with lozenge cuts and bake at 180° for 30/40 minutes, until a nice, uniform and golden crust forms.