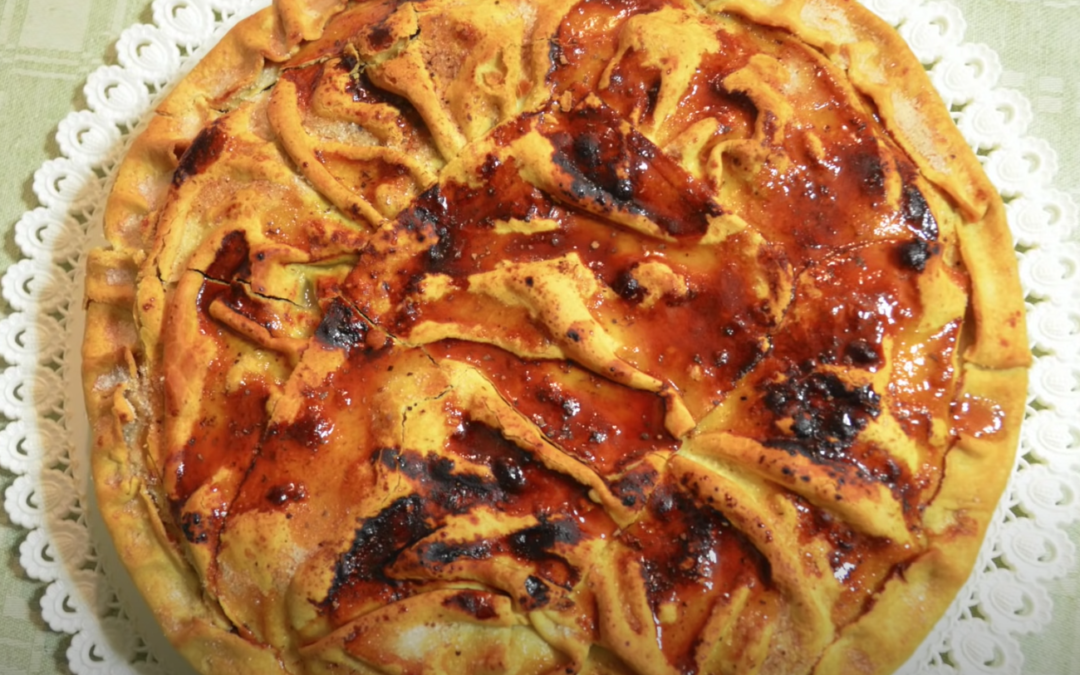 Although the name may be misleading, pizza 7 sfoglie is not a type of pizza, but a traditional and typical Apulian dessert prepared especially at Christmas time. It is original from Cernigliola’s area in the Foggia province. It has recently obtained recognition as a ‘traditional agri-food product of Apulia’ (P.A.T.). Its name, 7 sfoglie, comes from the use of 7 layers of puff pastry seasoned with dried fruit, jam, chocolate, and spices. Although different variants are depending on the town of origin (someone makes it with liqueur or cloves), the particularity of the recipe remains unchanged.

A bit of history of this delicious dessert

Typical  of the rural traditions, the pizza 7 sfoglie is traditionally prepared on November 1, the religious feast of All Saints, or during the Christmas holidays. It is said that, as early as the 17th century, in Cerignola, there was a peasant custom of stuffing seven layers of pastry with a rich filling made from dried fruit, spices, jam, and dark chocolate. But it is not easy to attribute the paternity of this recipe to one town rather than another. Some people place the origin of this cake in the town of Cerignola, others further north, in Orta Nova, in the land of the Cinque Reali Siti. But tradition is never lost. In Cerignola, the recipe for this dessert is passed down from generation to generation. The tradition is kept alive not only by our mothers and, before that, by our grandmothers, but also thanks to the many pastry shops in the area, which ensure that this dessert is still one of the most popular throughout Apulia, especially at Christmas time.

INGREDIENTS FOR THE PUFF PASTRY

INGREDIENT FOR THE FILLING

To prepare the seven-sheet pizza, first knead the ingredients for the dough, adding the water a little at a time (the dough should be quite firm). Divide it into 7 loaves, 2 of which are a little larger than the others, place them in a bowl covered with a plate and leave to rest for half an hour. Meanwhile, put into a bowl the almonds, the candied citron, the sugar, the zest of a lemon, the cinnamon, the dark chocolate, and mix. After the dough has rested, roll out one of the two larger rolls, using a rolling pin. Grease the bottom of a cake tin with oil and place the first sheet on top (let the edges come out and brush them with oil). Cover the first layer of puff pastry with the compound. Then take another piece of pastry and roll it out so that it only covers the bottom of the cake tin and not the sides, grease it, and proceed as above, five times. Finish with the last piece of pastry, which should be the same size as the first, and fold the edges inwards. Brush with oil and bake in a preheated oven at 160° for about 50 minutes. Before unmoulding, let it cool very well and serve after at least two days dusted with powdered sugar. Enojoy you pizza 7 sfoglie!