Bresaola: the healthiest and most delicious cured meat from Italy 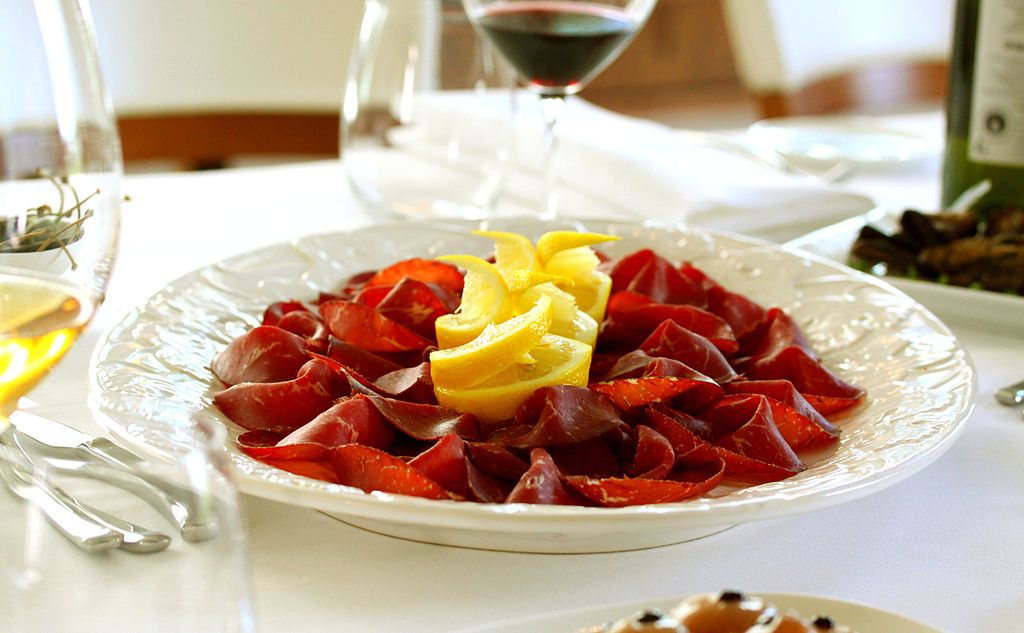 Bresaola is an air-dried salted beef that has been aged for two to three months. You know it’s ready when it hardens and turns dark red or almost purple. Its origin comes from Valtellina, a northern Italian city situated in the Lombardy region. Its original recipe recalls that it’s made from the top (inside) round of the beef, but many other recipes have been discovered where the meat is actually taken from other parts of other animals.

It is the perfect meal for every season, not only because it has a fresh, tangy taste to it but it’s also very healthy and filling as well, it is lean and tender with a smoky and musty smell. Bresaola is low in fat and is very digestible. Rich is its contribution of high quality and minerals that have a good functioning of the metabolism and have a good power of nutrition.

How it is produced and how to serve it

The trimming process is essential in the production of bresaola it is what it gives its unique flavor. Salt and spices are also added and given a few days period to cure, some recipes also add nutmeg, cinnamon and juniper berries. After that the meat takes averagely 2/3 months to dry up also depending on the weight of the given piece, at the end of the process the meat will lose up to 40% of its volume.

The way you serve the bresaola is as an “antipasto”, goes well with some rocket and cheese but in some places you can also find it as a second course, usually accompanied with some cheese, other cured meats or snacks. It is thinly sliced at room temperature or slightly chilled. It is also very commonly used to make some delicious sandwiches. You can eat bresaola on its own and it’s already delicious, but you can also add some condiments for a nice kick such as lemon juice, balsamic vinegar, black pepper and Parmesan.

If it happens that you’re storing some at home, make sure to keep in in the refrigerator well sealed for a perfect conservation.

The original bresaola is delicious, but have you tried its variants?

The first very common variant you can find is the horse bresaola, typically found in the Veneto region in northern Italy. The meat is from the horse’s thigh, deprived of the fats and nerves.

Usually made in the Novara province, the second variant is the deer bresaola. This is taken from the most valuable parts of the deer’s thigh and shoulder. Here the preparation process is also different because the meat is left to macerate in a brine of red wine although the drying process remains the same.

The last variant is the “smoked bresaola” produced in Valchiavenna, in the province of Sondrio, and locally called “brisaola”. After being stuffed into natural casings and curing, the smoking process takes place with pine wood.