Beans, the favorite meal of an international hero: Bud Spencer 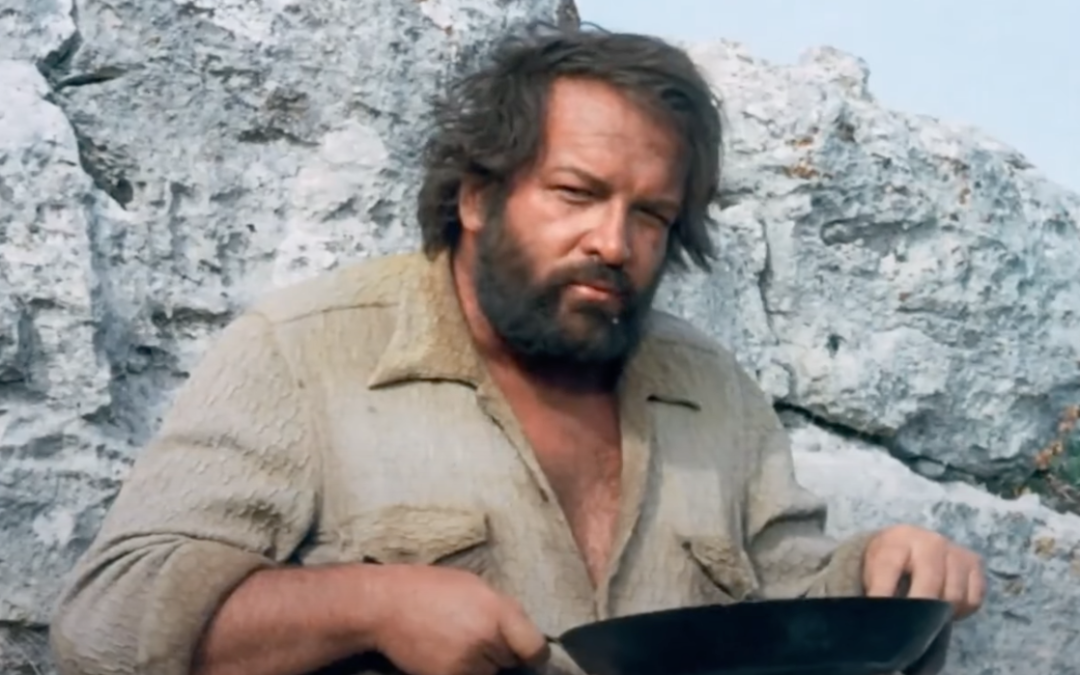 Many of the dishes shown in the various movies in which Bud Spencer and Terence Hill acted, show a plenty of choices, and when you start to watch their movies you never stop thinking about the beans cooked in that black pan, with a piece of bread to do scarpetta (the “scarpetta”, little shoe, is a typical Italian activity of cleaning the sauce from the plate and from the pots with a piece of bread, it is also a way to show appreciation for the dish that has been served).

Bud Spencer and his museum in Berlin

On 27 June 2021 a museum dedicated to Bud Spencer opened in Berlin, and the result  it’s an interesting exhibition fully curated by the Pedersoli family (Carlo Pedersoli it’s Bud Spencer real name), where more then 250 unique exhibits from the actor’s private life and the great film career of his alter ego Bud Spencer, are on display at the Römischer Hof, Unter den Linden. For the first time in Germany, a multimedia exhibition will deal with the great fan cult surrounding Bud Spencer and Terence Hill. The opening of the shop, next to the museum, is a must go for every Italian who live in Berlin, and the many German fans.

Childhood of many was filled with the dream to eat a delicious plate full of beans with Bud…what a memory! After a scene in which he gave a few punches, he always had a pan with beans and some piece of bread waiting for him.

A past Olympic champion

A separate section of the exhibition is dedicated to Pedersoli’s successful swimming career. In fact, from 1947 to 1957 he dominated the breaststroke and freestyle sections as Italian champion and participated in the 1952 and 1956 Olympics. Photos, medals, cups and the original Olympic bathrobe of the time are on display in Berlin. In addition, museum visitors are also able to see up close and even take pictures of a very realistic, life-size replica of Bud: “Lifelike Bambi”. This statue, incredibly resembling the real Bud, made to the smallest detail, really has nothing to envy to the so famous wax statues. Bud Spencer replicas were created by two young artists from Berlin. Furthermore during the visit it will be also possible to watch some of his most famous movies in a room dedicated to the actor’s bravura.

Bud Spencer and Terence Hill films marked an era and many generations. If you watch the scenes where they slowly binge in front of a nice chicken leg or a nice plate of beans, the atmosphere is so intense that you can almost smell those dishes.

It was in the 1970s that a genre of Italian-produced westerns (so called Spaghetti Westerns) began to spread in Italy, with the participation of actors such as Bud Spencer and Terence Hill. The role Carlo Pedersoli used to play, was totally linked to an hero/anti-hero as good as a loaf of bread, who thrives in the farcical vein of Italian cinema in the second half of the twentieth century, and even invents, a genre that suits him perfectly.