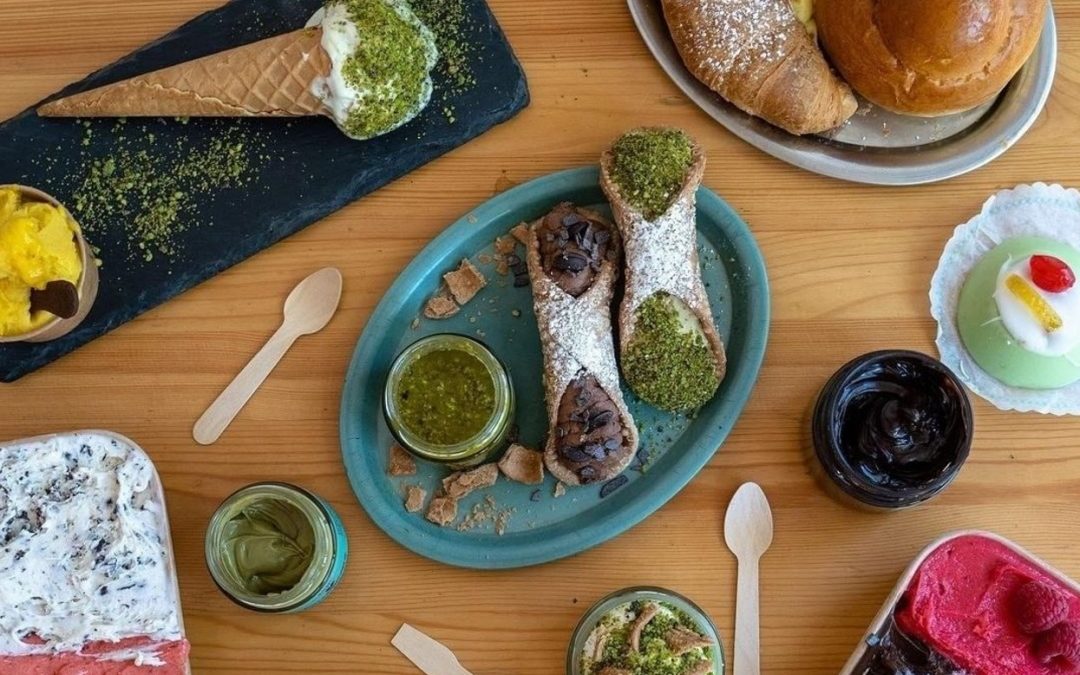 From Sicily, one of the most delicious dessert you can taste

Sicilian pastry is among the best and the most renowned all over the world, and rightfully so. On this island of absolute sweetness, cannoli is one of the undisputed symbols of a tradition as old as time. It’s a seemingly simple dessert, made with ricotta and sugar, of which there are several variants. One of them involves the use of another particularly popular ingredient in Sicilian cuisine: pistachio.

Preparing the perfect cannolo is not very easy. On the outside it’s made by a particular kind of waffle that’s supposed to be golden brown, crunchy and with just the right amount of thickness. It should be neither too thick, not too thin so as not to break.
The cream is the perfect balance between sugar and the freshest, well-sifted sheep’s milk ricotta. Last but not least, the pistachio: the most reknowed quality comes from Bronte, a small town on the slopes of mount Etna. Some add it in cream, to enrich the filling, others in the form of grains, as a garnish. The experience of master pastry chefs, anyway, is essential to obtain the perfect pistachio cannolo. Some cool facts about cannoli

The true origins of cannoli, it seems, are lost in the mists of time. Of course, the original recipe has undergone many variations over the centuries. However, already Cicero, in 70 B.C. tells us of his journey to Sicily and of coming across a sweet whose description comes really close to that of the cannolo as we know it today.

Looks like even historians have been interested in the origins of this dessert, without however coming to the head of the mystery. According to some, cannoli originate from the city of Caltanissetta, according to others they are the result of a mix between Arab and Sicilian culture. Some say that the cloistered nuns invented it, while for the famous historian Gaetano Basile it was born as a carnival dessert.
We will never know for sure, but what matters the most is that we can still enjoy it today, in its exquisite modern version. Pistachio cannoli & more. Where to find it all in Berlin

Cannoli are an unforgettable taste experience, able to satisfy even the most demanding desserts lovers. In Berlin you can find the best quality at Kuchen Von Gaia, Duo – Sicilian Food Lab or Focacceria San Francesco.

Come an taste them and much more also at the Italian Street Food Festival on Saturday 18th and Sunday 19th of June. You’ll find a lot of other tasty italian food as well. Where? At Club Ost, between Treptower Park and Ostkreuz, from 11am to 10pm.