The Emilian Sfoglina: one of the oldest and most authentic crafts in Italian culinary tradition 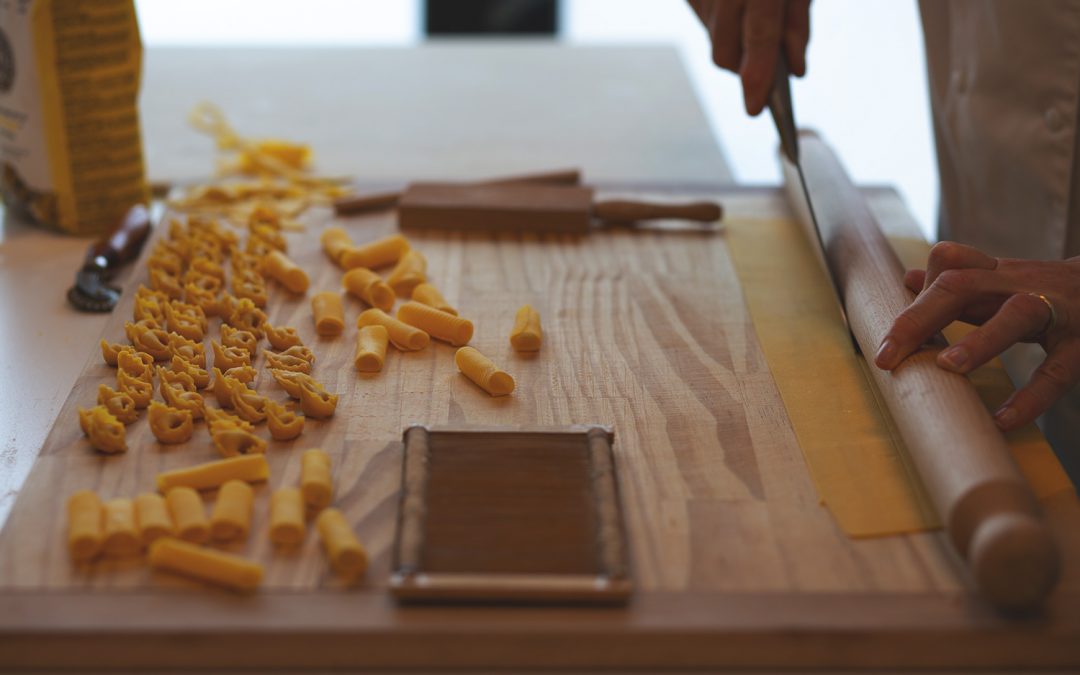 Italian Cuisine Week (14–20 November) will soon be celebrated all over the world, and we here at Cuciniamo Italy couldn’t help but dedicate this article to one of the oldest crafts in the Italian culinary tradition.

If you were to ask a young Italian on the street what sfoglina is, I think most of them would say it’s that homemade pasta at the basis of ravioli and lasagne, among others.

Read this article also in Italian and German.

Not everyone knows, in fact, that behind the word sfoglina there is actually a real, flesh-and-blood person, whose craft is among the oldest and most deeply rooted in Italy’s long culinary tradition. If we wanted to attach a graphic image to this activity, we would picture a middle-aged lady, rolling pin in
hand, working the dough and rolling it out into a thin sfoglia (sheet of pasta dough), ideal for cutting and shaping according to the desired recipe.

The sfoglina’s trade is an art that has survived centuries of history and technological changes, and it is recognised today as an ‘official trade’ rather than just a casual art. It is one of those activities that takes us Italians back to our grandmothers’ time, and especially to the genuine flavours of home… To those Sunday mornings waking up to the creaking of the kitchen table as it swayed under the motion of the rolling pin vigorously rolling out pasta dough. Mostly it was grandmothers who did this job and, at lunchtime, they would come to the table with their aprons still covered in flour, holding a plate heaped with steaming tagliatelle.

Those who have experienced this tradition at home surely know that the sfoglina’s craft has its roots in the central part of Italy, and in the Emilia-Romagna region in particular. Bologna, Forlì, and Ravenna are among the iconic cities associated with home-made egg pasta.
Obtaining a perfect sfoglia is not an easy task; in addition to flour and eggs, it requires a hidden ingredient, namely dexterity, combined with a lot of love and passion. The perfect cappelletto or tagliatella can be recognised not only by its taste, but also by the consistency of the egg pasta used, which must be neither too thick nor too thin. The sfogline of yesteryear used to hold the sfoglia up to the sunlight, determining whether or not the consistency was right on the basis of its transparency. But beyond the dough, there are factors such as its coarseness and colour that must be judged… In short, only a true sfoglina knows how to recognise a perfect sfoglia!

If you want to learn more, read the article on CucinaimoItaly.

Ricotta and Spinach Ravioli, a must-have recipe of Italian cuisine for connoisseurs of all ages.

Working pasta dough by hand produces succulent culinary masterpieces like tagliatelle, cappelletti, and ravioli. At the end of this process, every sfoglina delights in shaping her dough according to the recipe she has in mind.

One of the recipes beloved by people of all ages is ricotta and spinach ravioli, which is quick and simple to make. For those lacking the dexterity to roll out the dough like the sfogline of yesteryear, we know that many have turned to the manual pasta machine, which can come to the rescue in such cases.
Ricotta and spinach ravioli is a complete dish and its filling is bursting with fresh, delicate flavour. For those interested in trying their hand at making it, we recommend the recipe of our chef Danilo Angè, who gives a step-by-step explanation of how to prepare the egg pasta and its delicious filling on Cuciniamo Italy.

(P.S., If you make them, send us a photo and tag us @cuciniamoitaly).
Buon appetito!