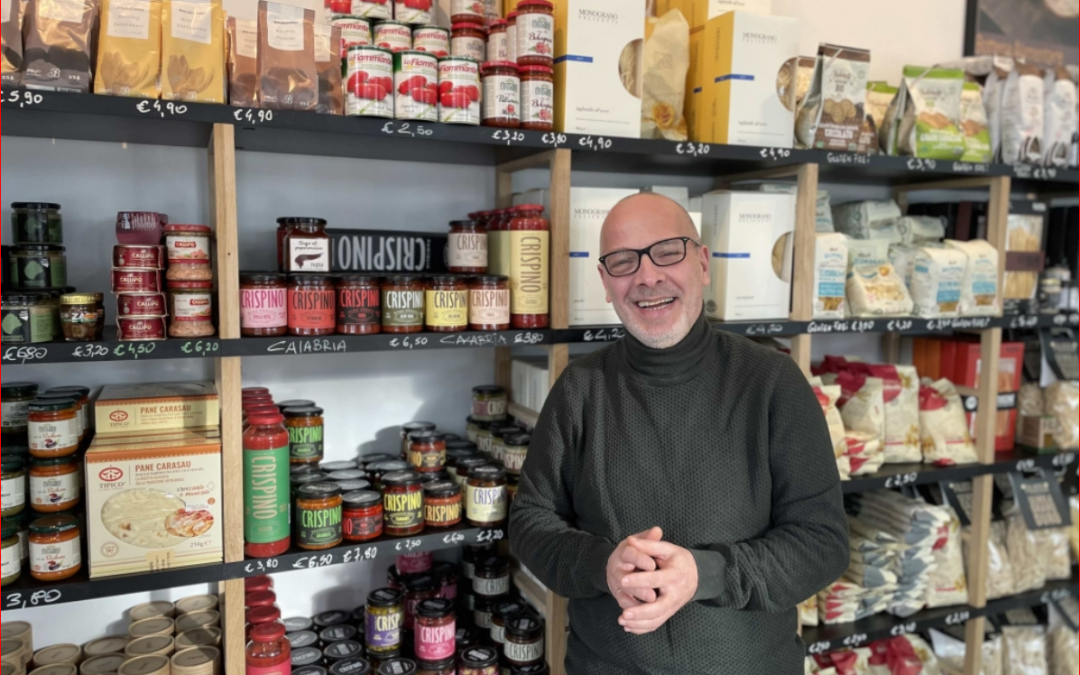 Portamivia, the Italian shop of Calabrian food (and more) for grocery shopping or aperitif in Berlin

The German capital has a new Calabrian gastronomic garrison: it is called Portamivia – Bottega Alimentare of Giuseppe Russetti.

Calabria, in terms of food products and gastronomic culture in general, has long been under-represented in Berlin, especially when one considers how many Calabrians work in the German capital, sometimes in the restaurant industry itself. This situation is, at least partially, destined to change thanks to the recent efforts of Giuseppe Russetti, originally from Simeri Crichi, Catanzaro province.

Portamivia, the concept and products

Giuseppe is working toward this in two directions. The first one represents the opening of Portamivia – Bottega Italiana: a new, small Feinkost full of Calabrian delicacies (but even more, there is also a lot of Tuscany and other Italian regions), where, actually, you can have meals too (in winter it is open until 8pm and in summer until 10pm). The second direction is the service of promoting and distributing those same products in Italian restaurants in the city. Crispino family’s sauces (such as the one made with ‘nduja from Spilunga), oil (three Gambero Rosso leaves in 2022) from Olearia Geraci, licorice desserts, truffle dough tagliatelle from Pirro, Officine dei Cedri‘s Amaro di Cedro and dried figs in chestnut honey and rum, or the same company’s Amaro di Cedro, represent only a small part of a high quality but affordable priced product offering, that starts in Calabria but expands to the rest of Italy.

Felicetti monograin pasta, Lunardi cantuccini, Tipico’s carasau bread, Bio Orto’s sauces, Tre Marie’s cookies, and so much more, including a variety of wines, fill the rest of the walls of a place where you can also get hot food. Giuseppe explains to us: “We prepare each type of lasagna, every day one different, yesterday it was with Calabrian sausage, nduja, smoked provola cheese and cherry tomato. Another specialty of the house is gnocchi, a few days ago we made them with Sicilian caponata and burrata”. For those who prefer to have an aperitif instead, those same products sold at the counter can also become a rich platter of sliced meats, aged cheeses, and mozzarella. “The basic idea is that everything, or almost everything, that can be purchased is also consumable at the table”.

Giuseppe, from Calabria to Berlin, through Rome

Giuseppe has worked in the food business for more than 30 years. He had several local in Rome before moving to Berlin. “Opening a business here is much easier, less bureaucracy, less set-up costs, and also the perception that it is a more permeable market at the moment to quality-based concepts. This is what attracted me when I moved in 2012″.

He adds: “For a few years here I worked in restaurants as a chef, thus gradually trying to get to know the environment. Then, first with the restaurant Eccolo, later closed, now with Portamivia, I tried to have something of my own. In all these years, however, I have also been, though not always full-time, a distributor in Italy of specific products, including some German beers such as BRLO and Berliner Berg. In short, Portamivia tries to unite these two souls, that of welcoming customers and that of promoting products that I believe in, in this case Italian ones, of quality and perhaps niche, that otherwise would not be found in Berlin. It’s quite a challenge. A year after opening, it seems to me that it is working. I’m not only happy about it, but also, a little bit, let me tell you, proud”.